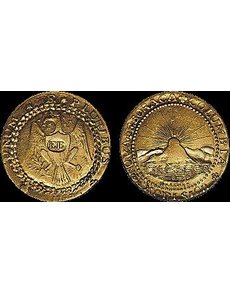 Donald Doyle, president of Blanchard & Co., the Baton Rouge, La., numismatic business that sold the coin after it passed through an intermediate buyer, Dec. 13 confirmed the transaction to Coin World, but declined to name the new owner at the owner’s request.

The nearly $7.4 million price paid for the coin places it third in the ranking of highest priced American and U.S. coins, and at the top of the list for a nonfederal, early American coin. The top-ranked coin is a 1794 Flowing Hair silver dollar sold at private treaty in May 2010 for $7.85 million. The highest price reached at auction is the $7.59 million paid in July 2002 for the only 1933 Saint-Gaudens gold $20 double eagle authorized for private ownership.

The Brasher doubloon just sold was also the prior record holder for a nonfederal American coin. The unique Punch on Breast doubloon has held the record in that category of coinage since it was purchased for $2.99 million on Jan. 12, 2005, in Heritage Numismatic Auctions’ Platinum Night auction held in conjunction with the Florida United Numismatists convention.

Blanchard purchased the Punch on Breast example of the 1787 Brasher doubloon for an undisclosed sum from John Albanese — founder of Certified Acceptance Corp., co-founder of Professional Coin Grading Service and founder of Numismatic Guaranty Corp. Albanese purchased the coin for an undisclosed sum through the majority owner of the coin, Steven L. Contursi, founder and president of Rare Coin Wholesalers of Dana Point, Calif. The multiple transactions from Contursi to Blanchard’s customer took less than a month to consummate.

Albanese said Dec. 13 that he had offered $5.5 million for the coin three years ago, but that offer was rejected by the coin’s co-owners.

Although Contursi declined to disclose the sum for which he sold the coin to Albanese, he confirmed that, with accumulated interest with loans associated with the coin over the past six years, he and the coin’s co-owner, California dealer Donald Kagin, had a total of $4.6 million invested in the coin.

Contursi said Dec. 13 that the decision to sell the unique Punch on Breast example of 1787 Brasher doubloon sprouted from Contursi’s submission of the coin and other coins in early to mid-November to CAC for review, hoping to receive CAC’s sticker on the PCGS encapsulation.

Contursi said the deal to sell the coin was consummated through a telephone “handshake” with Albanese after the doubloon was returned from CAC with the CAC label confirming the grade.

At the January 2009 Heritage auction, Contursi placed the winning bid for the coin, with Contursi holding two-thirds ownership and Kagin, from Kagin’s in Tiburon, Calif., holding one-third interest.

Before Contursi had placed the winning bid for the coin in 2005, Kagin was already the successful bidder in the same auction on three other coins bearing metalsmith Ephraim Brasher’s EB counterstamps: $7,475 for a Fine to Very Fine regulated Brazilian 1727-M gold 1,600-real coin; $609,000 for the Lima Style 1786 (“1742”) Brasher doubloon, graded NGC EF-40; and $2,415,000 for a Punch on Wing 1787 Brasher doubloon of the New York Style, graded NGC About Uncirculated 55 (the Punch on Breast coin is also of the New York Style).

Kagin said Dec. 14 that the three coins he purchased individually in January 2005 were eventually placed with one of his clients.

In 1787, “dollar” was understood to mean the “Spanish milled dollar,” or the silver 8-real coin minted for Spain and its colonies. The corresponding value of a Spanish gold “doubloon” might fluctuate, but an approximate figure given for years was $16. By the time Brasher struck his gold pieces, however, New York had officially established a new $15 standard.

Although dated 1742, the pieces referred to as Lima Style doubloons are believed by researchers to have been produced in 1786, in Brasher’s efforts toward making a circulating coin for local use.

The obverse of the Lima Style doubloon features, according to the 2005 auction lot description, a design reminiscent of the common Philip V Lima doubloons: “Two pillars with fleur-de-lis above and waves below, divided by two vertical lines into nine sections with L 8 V above, P V A central, and 7 4 2 below. All is enclosed in a beaded border with BRASHER in small letters between bottom beads and waves. Lettering around is absent on this example, the outer portions clipped or filed away. Although not visible on this specimen, the obverse legend reads: • PHILIP • V • D • G • H • REX ANO 1786. Between G and H are small letters NY, identifying Brasher’s place of residence.”

For the Lima Style reverse, “A Jerusalem cross divides the die into four quadrants. Rough engraved castles appear in the northwest and southeast quadrants, lions in the opposing quadrants. EB hallmark of Ephraim Brasher appears at the center of the cross. As the hallmark was stamped at the center, on a raised portion of the design, it takes on roughly the same shape as the design, thus is not a well defined oval. Only portions of the reverse legend are legible on the Newcomer specimen, and are not at all legible on this Paris specimen: I HISPAN ... IND REX.

“The complete legend would be: I HISPANIARUM ET IND REX.”

The New York Style doubloon’s obverse depicts an eagle beginning to open its wings, with the EB punch either on the eagle’s breast, in the case of the unique example, or on the eagle’s right wing (viewer’s left) on the other six examples.

A unique 1787 New York Style half doubloon resides in the National Numismatic Collection at the Smithsonian Institution at the Museum of American History. ¦