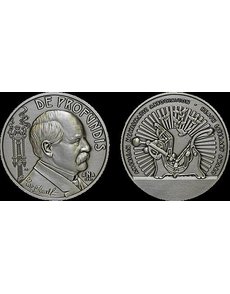 A new design for the Heath Literary Award medal presented to second- and third-place winners features a portrait of Dr. George Heath on the obverse and a printing press on the reverse. The new design is by artist and medalist Jamie Franki. It was struck by Medalcraft Mint.

Q. David Bowers won the first-place Heath Literary Award for his article “Era of Secrecy,” which focused on the U.S. Mint’s practice of striking special coins for collectors in the late 1800s, which was published in the March 2012 issue of The Numismatist.

The award was presented Aug. 15 during the American Numismatic Association World’s Fair of Money in Rosemont, Ill.

The ANA literary awards recognize articles published in the preceding year in The Numismatist, the ANA’s official magazine.

Bowers was presented with $250 in cash, the final silver medal in the old design and a certificate. Bowers donated his cash prize to the ANA’s Dwight N. Manley Numismatic Library.

He also received a special plaque as a thank you for his donation to fund the new medal design given this year to the second and third place winners. The plaque included a replica of the new medal.

The Heath Literary Award was named for Dr. George F. Heath, who in 1888 was ANA founder and inaugural editor of The Numismatist.

Nancy Oliver and Richard Kelly took the second-place award in this category for their feature “On the Wrong Track,” published in the September 2012 issue. The feature described a daring 1877 train robbery in which the robbers got away with thousands of double eagles. They received $100, a bronze medal and a certificate.

David F. Fanning won third place for his article “Top 10 American Numismatic Books of the 19th Century,” published in the February 2012 issue. The article showed how classic references continue to inform today’s collectors. He won a bronze medal and a certificate.

This year the medals given to the second- and third-place winners feature a new design by artist and medalist Jamie Franki and struck by Medalcraft Mint.

The medal production was underwritten by Bowers.

The obverse depicts a right-facing portrait of George Heath, a facsimile of his signature and the ANA lamp of knowledge as it appeared on early issues of The Numismatist. The Latin inscription DE PROFUNDIS, meaning “out of the depths,” is a part of the obverse design.

The reverse shows a small press on which the ANA journal was first printed. The doves and rays emanating from the press represent the dissemination of knowledge and goodwill. The text AMERICAN NUMISMATIC ASSOCIATION HEATH LITERARY AWARD nearly arches around the reverse design.

Mark Fox was presented with the Wayte and Olga Raymond Memorial Literary Award. The award is presented for articles that display original and comprehensive research in U.S. numismatics.

His first-place award was given for his article “In Search of Machin’s Mills,” published in the December 2012 The Numismatist. He received $400 and a certificate.

David E. Schenkman was given the second-place award, $200 and a certificate for his article “The Numismatic Legacy of S.D. Childs,” published in the October 2012 issue.

No third-place award was given in this category.

P. Scott Rubin won the first-place Catherine Sheehan Literary Award for U.S. Paper Money Studies for his article “New Jersey Currency of 1776,” published in the July 2012 issue of The Numismatist. He was given $50 and a certificate.

No third-place award was presented in this category. ¦