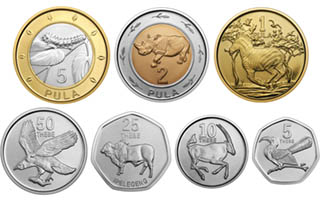 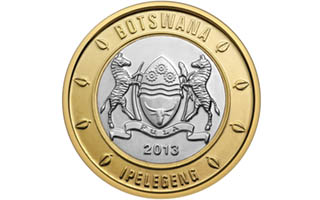 The obverse of each of the seven new coins depicts Botswana’s coat of arms, as seen here on the ringed bimetallic 5-pula coin.

New coins have begun circulating in Botswana after the Bank of Botswana ordered a revamp of the circulating coinage.

The Royal Canadian Mint secured the contract to produce the multi-ply plated steel coins, which range from the smallest denomination, 5 thebe, to the largest, 5 pula. Other coins include the 10-, 25-, and 50-thebe pieces, and the 1- and 2-pula coins.

The design themes remain the same as the previous series of coins, which was updated in 1998 following the withdrawal of the 1- and 2-thebe coins. In 2000 a ringed-bimetallic 5-pula coin was introduced to Botswana’s coin family.

Each reverse depicts wildlife of Botswana and the denomination, and the obverse of each coin shows the national coat of arms and the year date.

A zebra, trees and birds appear on the ringed-bimetallic 1-pula coin, which measures 26 millimeters in diameter. A square-lipped rhinoceros joins sorghum heads on the 2-pula coin, whose diameter is 27 millimeters.

The 5-pula coin, which measures 28 millimeters in diameter, shows a mopane worm on a mopane tree branch.

According to the Bank of Botswana the update of the national coinage includes new security features and technology, but neither the bank or the RCM has disclosed what those measures are.

Old coins may be exchanged for a period of six months at commercial banks following the launch of the coins (the exact launch date and subsequent deadline have not been announced). After that period, however, members of the public may redeem old coins at two branches of the Bank of Botswana for five years.

Dealer Joel Anderson just acquired examples of the new coins on March 26 and offers them in a set for $15 per set, and $4 shipping and handling per order.