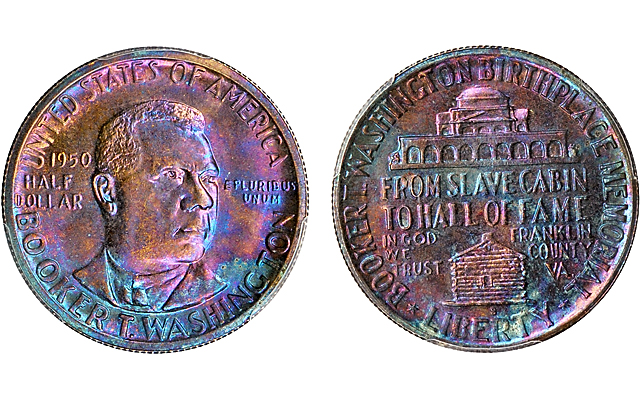 The story: The Booker T. Washington commemorative coin series was a mammoth 15-coin series struck between 1946 and 1951 at the Philadelphia, Denver and San Francisco Mints.

The 1950-S coin is one of the higher mintage issues in the series and is generally priced in most grades as a “type” piece for the issue. It’s readily available in grades up to and including Mint State 65.

Silver coins often acquire toning over time as their surfaces react with their environments. Sometimes the toning on a silver coin is artificially applied to mimic the natural toning that occurs over time.

This looks to be the case on this example that Professional Coin Grading Service has graded Uncirculated Details, Questionable Color. Naturally toned coins, especially Booker T. Washington half dollars, rarely appear with this sort of almost painted on color in orange, blue and purple shades.

Still, some people love wild color on coins, regardless of whether or not it is natural, and this example brought $26, right in line with what an average Mint State example might bring at auction.