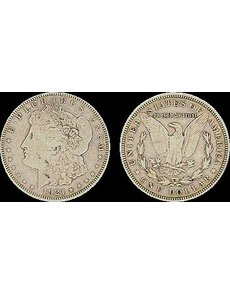 A 1921 Morgan silver dollar reportedly recovered from the Ford V-8 where Depression-era villains Clyde Barrow and Bonnie Parker died in 1934 realized $32,400 in a Sept. 30 auction.

All images courtesy of www.rrauction.com. 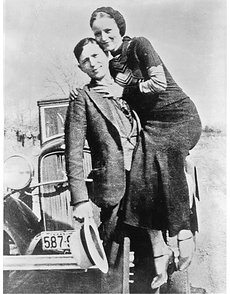 The criminal tag team’s notoriety rose after photos of them together, including this scene, were discovered in a Joplin, Mo., hideout.

All images courtesy of www.rrauction.com.

The Depression-era outlaws known as Bonnie and Clyde died in a hail of bullets, but left much more than a trail of death and mayhem.

The coin was reportedly found inside the pocket of Barrow’s dark blue blazer by one of the six sheriff’s deputies that participated in the final pursuit, according to RR Auction, the Littleton, N.H., firm that conducted the sale.

The coin was one of two silver dollars reportedly recovered by Deputy Sheriff Ted Hinton at the scene of the Gibsland, La., ambush of Barrow and his accomplice Bonnie Parker on May 23, 1934. The blazer had been slung across the seat of the Ford V-8 the couple drove, between the romancing rebels, according to the auction house.

Accompanying the single coin was a letter from Hinton’s son, Linton J. “Boots” Hinton, detailing the circumstances of the coins’ acquisition and subsequent dispersal.

According to Hinton’s letter, “Nothing has ever been mentioned, written, or published about Clyde’s jacket being in the car right after the melee that morning. Only Ted and the other five posse members were aware of the jacket ... I was later made aware of the jacket.”

The letter from Hinton says that his father sold the coins, “which he kept in his ‘coin box,’” in 1946, reportedly to a Dallas antique dealer. According to a letter from another source, the antique dealer later traded the coin and other valuables to reputed mobster Paulie Castellano of the Gambino mob family to settle an outstanding debt.

This provenance is detailed in a letter from Michael Kozlin. Kozlin reportedly received the coin in 1986 from his grandfather, Armand Castellano, a convicted bank robbery get-away-car driver and a cousin to Paulie Castellano. Armand had reportedly received the coin in 1966. Within the last year, according to RR Auction President Bobby Livingston, Kozlin contacted Linton Hinton, “who confirmed the details of the origin of the coin from Barrow’s jacket pocket.”

The whereabouts of the other coin that was reportedly found in Barrow’s possession are unknown, Livingston said.

The auction house did not assign a grade to the silver dollar, which exhibits obvious, even wear; the 1921 coin is the most common of Morgan dollars and has a current Coin World’s Coin Values price of $28 in Good 4 and $42 in Mint State 62. ¦