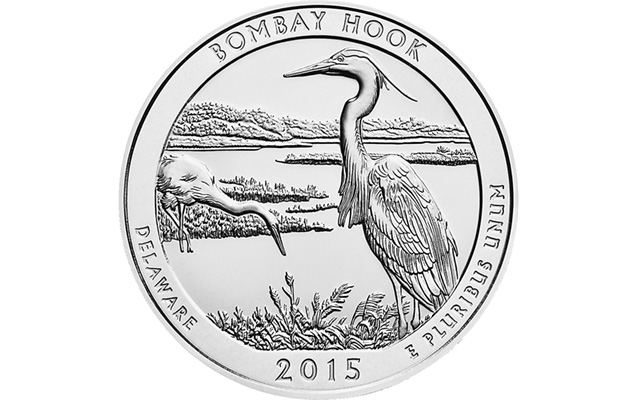 The 2015 Bombay Hook National Wildlife Refuge quarter dollar depicts a great blue heron in the foreground and a great egret in the background.

The event will be held at the Bombay Hook National Wildlife Refuge Visitor Center at 2591 Whitehall Neck Road.

Immediately following the ceremony, a coin exchange will be conducted during which the public may exchange cash for $10 face value, 40-coin rolls of Uncirculated circulation-quality coins. There is a one-roll minumum and 10-roll maximum.

From 6  to 7 p.m. Sept. 17 at the same site as the coin launch, the U.S. Mint will host a collector forum to receive feedback from collectors and share information on Mint products and programs.

The Bombay Hook National Wildlife Refuge quarter dollar is to be released into general circulation through the Federal Reserve Banks and member banks starting Sept. 14.

The Bombay Hook coin is the 29th of 56 coins to be issued under the America the Beautiful Quarters Program. The coin's reverse was designed by U.S. Mint Artistic Infusion Program Artist Joel Iskowitz and sculptured by U.S. Mint Medallic Sculptor Phebe Hemphill.

The design features a great blue heron in the foreground and a great egret in the background.