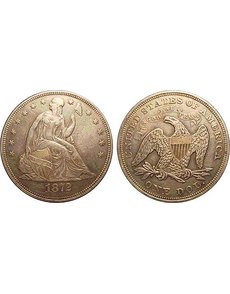 The overall appearance of the fake 1872 Seated Liberty dollar is that of a coin that has been lightly acid etched, with ragged details and light surface pitting. 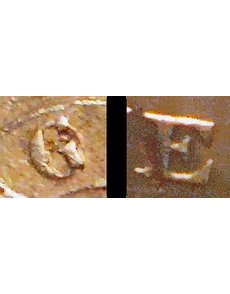 A defect is seen on the G of GOD, above, and another defect on the E of ONE, right.

The influx of counterfeit silver coins from East Asia is something that I have mentioned frequently in this column.

Large numbers of fake Bust dollars, Seated Liberty dollars, Trade dollars and Morgan dollars have been submitted to ANACS, many of which had been purchased via online auctions.

The counterfeit 1872 Seated Liberty dollar shown here is typical of the overall quality we have been seeing.

While at first glance this fake 1872 Seated Liberty dollar appears deceptive, once you take a careful look at the coin’s surfaces with a quality magnifier, many problems arise.

The overall appearance of the fake is that of a coin that has been lightly acid etched, with ragged details and light surface pitting.

The date and the stars on the obverse exhibit this rough, ragged texture, especially noticeable if you have a genuine example for comparison purposes.

Light pitting appears on Miss Liberty’s head, both her shoulders and the arm holding the staff.

By itself, a rough, ragged surface on a Seated Liberty dollar is not enough to condemn the coin, since many of these pieces were damaged and mishandled over the years.

However, when combined with other factors, the “case” against this coin becomes stronger.

On the reverse, many of the letters in UNITED STATES OF AMERICA and ONE DOL. exhibit a similar ragged appearance, and the fields appear lightly etched. A defect is visible on the G of GOD, and another defect on the E of ONE.

Finally, the edge reeding is incorrect for a Mint State 1872 Seated Liberty dollar. Where a genuine coin would have slightly shallow edge reeds, with some beveling where the edge joins the rims, this fake has very sharp, squared-off edge reeding.

The weight, diameter, and other specifications are the same as a genuine coin, which means that this fake is at the upper end of the quality scale for recent counterfeits.

A lower end fake is made of base metal and struck from crude, hand-cut dies. A medium level fake would have some silver in it, but the weight would be off by a gram or two, and the die quality is average.

An upper level fake will have the same silver content and specifications as a genuine coin, and is struck from high quality transfer dies.