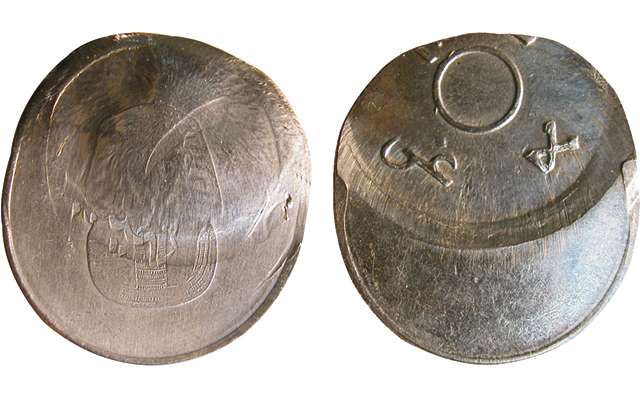 An obverse die carrying an unfinished Egyptian 1-pound design was used to strike one face of a steel planchet whose original purpose is unknown. The reverse face was struck by a flat, featureless die. The coin was later canceled. 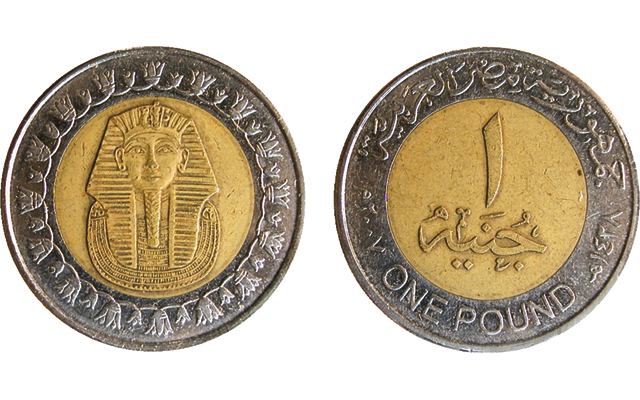 A normal Egyptian 1-pound coin is struck on an 8.5-gram ringed-bimetallic planchet. The obverse design is completed by a wreath of lotus blossoms. 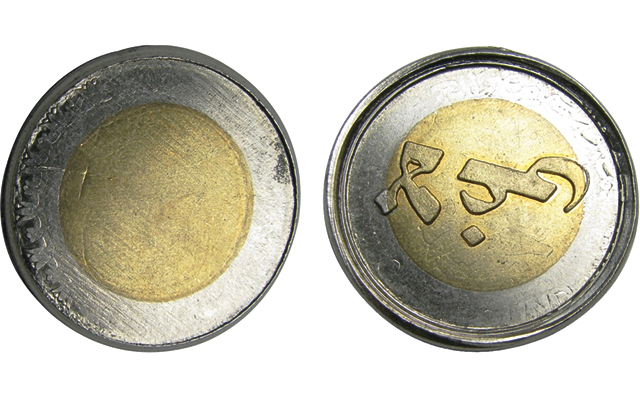 Originally broadstruck, this Egyptian 1-pound coin was canceled by using a cancellation die on the reverse face (note the different symbol arrangement) and a flat die on the obverse face.

Most United States pattern coins feature a full design on both faces. But a small number feature a design on only one face. These are often produced early in the testing phase of a design.

Some of these uniface test strikes (trial strikes) are applied to oversized, sometimes irregularly shaped pieces of base metal and are known as “splashers.” Other attempts involve normal-size planchets (sometimes off-metal) that are constrained by a collar.

The blank surface of uniface pattern test strikes can reflect the presence of a metal block, an underlying planchet, or a smooth, flat-faced die.

All domestic uniface pattern test strikes are rare and costly. Most date from the 19th century. The most recent uniface test strike I am aware of is a zinc cent planchet that carries the well-known Martha Washington obverse test design. This is not actually a pattern strike, but simply a test strike using a standard nonsense die.

Uniface pattern test strikes produced by other nations frequently come up for sale on eBay and other auction venues. The example illustrated here arrived from Egypt. It features a design that is recognizable as belonging to the ringed-bimetallic 1-pound coin that was first produced in 2007 and that features the funerary mask of King Tutankhamen on the obverse face. It’s an off-metal strike on a solid steel planchet that weighs 5.96 grams instead of the normal 8.5 grams. The specifications do not correspond to that of any contemporaneous Egyptian coin.

The obverse design on this test strike features only the Boy King’s gold mask; it lacks the circlet of lotus flowers that ordinarily surrounds the mask. This peripheral design component was clearly absent from the die face.

The strike is somewhat weak, possibly due to the thinness of the planchet. The reeding is weak, but its spacing does match that of a normal 1-pound coin.

The diameter of the coin is impossible to measure accurately due to a subsequent cancellation strike. However, since the distance between the bottom of the funerary mask and the design rim is identical to that of a normal 1-pound coin (4 millimeters), I will assume that the diameter of the pattern coin was originally the same as a normal example (25 millimeters).

It’s not clear when or why this uniface pattern test strike was produced. The coin may have been struck during the testing phase for this design and then retrieved from storage when Egypt’s regime unraveled. It’s possible that an unfinished obverse die was retrieved from storage and then used to produce a coin for the collector market. It’s even possible that an unfinished pattern hub was taken out of storage and used to fabricate the obverse die used in this strike.

As with many recent Egyptian error coins, this piece was canceled in an unusual fashion. The reverse face was struck 40 percent off-center by a cancellation die bearing a familiar array of cancellation symbols. The obverse face shows an incuse, mirror-image version of the 1-pound reverse design. Evidently, a 1-pound coin was inserted between the pattern coin and the other cancellation die, leaving the former with an ersatz brockage.

The presence of a brockage facsimile suggests that the cancellation strike may have been a misguided attempt to add complexity to the coin’s simple appearance. If so, it served only to reduce the coin’s desirability.

Flat-faced dies that match the diameter of the 1-pound coin have been used in contexts other than test strikes. Some cancellation strikes employ a cancellation die on one face and a flat die on the other face. Some unstruck 1-pound planchets have been struck on both faces by flat dies.