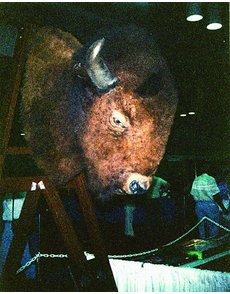 The North American bison named Black Diamond, whose mounted head is shown above, likely served as the model for the reverse design of the Indian Head 5-cent coin, introduced in 1913.

The theme for the 2013 National Coin Week will be “Buffalo Nickel Centennial: Black Diamond Shines Again.”

The American Numismatic Association’s 90th annual celebration of all things numismatic will take place April 21 to 27.

A century ago, the United States Mint was preparing to release what would become one of the nation’s best-loved coin designs — the Indian Head 5-cent coin, or “Buffalo nickel” — notes the ANA. A North American bull bison named Black Diamond, who once lived at New York’s Central Park Zoo, likely served as the model for the coin’s iconic reverse. Several different Indians are believed to have modeled for the composite portrait on the obverse of the coin.

The ANA will host a variety of National Coin Week educational activities online and at the Edward C. Rochette Money Museum in Colorado Springs, Colo.

Events, activities and educational content will focus on the Indian Head 5-cent coin, which was struck from 1913 to 1938. Subjects that will be part of the celebration will be Native American history, animals on coins, the “Renaissance of American Coinage” and the famous 1913 Liberty Head 5-cent coin.

Activities and resources for National Coin Week include:

? A video treasure hunt. Collectors will be able to watch video clues via the ANA’s YouTube page and website to find numismatic objects and answers.

? An ANA club challenge, where member clubs test their numismatic knowledge and compete for prizes.

? An open house at the Edward C. Rochette Money Museum on April 27, which will include free admission, activities for children and adults, and the minting of the 2013 National Coin Week medallette in the museum’s Mini-Mint.

For more information or to request club promotional materials, call the ANA at 719-482-9814, email it at ncw@money.org, or write to American Numismatic Association, 818 N. Cascade Ave., Colorado Springs, CO 80903. ¦