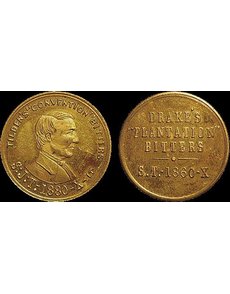 New York governor and Democratic reformer Samuel J. Tilden won the popular vote for U.S. president in 1876, but fell one vote short of the 185 electoral votes necessary to seal the deal in the Electoral College. A 15-member Electoral Commission awarded the contested election to Republican Rutherford B. Hayes.

Although it was discovered that Tilden used similar ciphers in his business dealings, he denied the charges and was personally cleared of involvement. However, the “scandal” gave fodder to his political opponents, and ruined his chances for renomination during the next election cycle.

The store card shown was not circulated by Tilden’s partisans, but circa 1878 to 1880 by his opponents, likely anti-Tilden Brooklyn Argus editor Demas Barnes, who also had a half interest in Drake’s Plantation Bitters.

The Democrat Barnes foretold “Tilden’s ‘Convention’ Bitters,” arising from his scandal, would cause his exit from the party stage at the next national convention in 1880.

Marketers at the time, taking their cue from secret coded ciphers that aided the North in winning the Civil War, jumped on the messaging bandwagon. This was especially true of the omnipresent proprietary medicine vendors, who proliferated trade style ciphers to increase public awareness of their products through “word of mouth” speculation in the marketplace.

The most famous cipher of the period was created for Patrick H. Drake’s proprietary cordial, Drake’s Plantation Bitters, advertised on the reverse of the illustrated store card. Drake’s enigmatic cipher “S. T. — 1860. — X.” was plastered worldwide. It was so omnipresent that it even invaded Mark Twain’s novel The Innocents Abroad and William Dean Howell’s novel The Rise of Silas Lapham.

Drake’s cabalistic slogan meant absolutely nothing, according to his ad agent George P. Rowell, and was only a gimmick to capture public attention.

That 1880 convention was indeed politician Tilden’s last hurrah on the public stage, as Drake’s business partner Barnes had predicted.