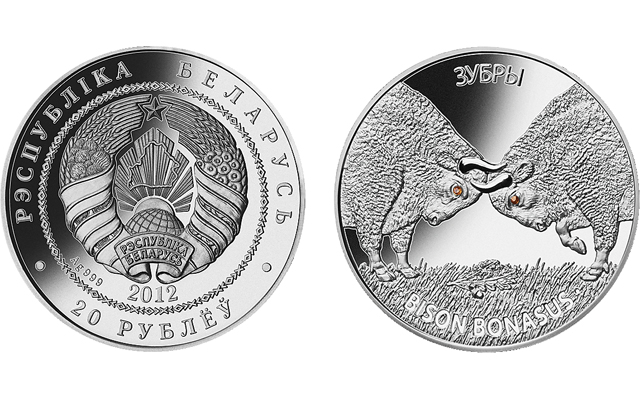 Two European bison lock horns on the reverse of the Proof 2012 silver 20-ruble piece from Belarus. 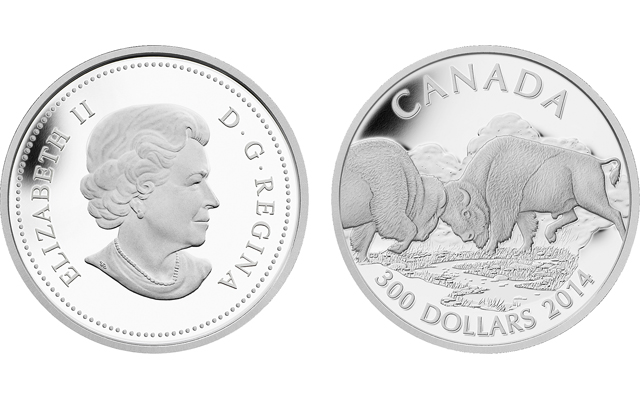 A Proof 2014 platinum $300 coin released last fall was the first Canadian coin with the design showing the challenge for power — two bulls locked in battle over a potential mate in a design on the reverse. 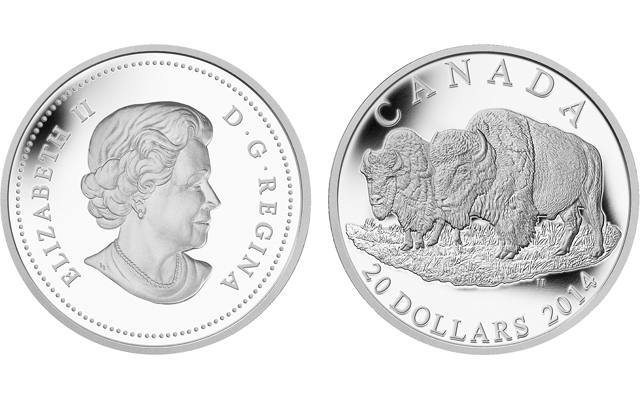 After he victoriously defends his right to a mate, a bull, forefront, stands with a cow on the reverse of a Proof silver $20 coin from Canada. 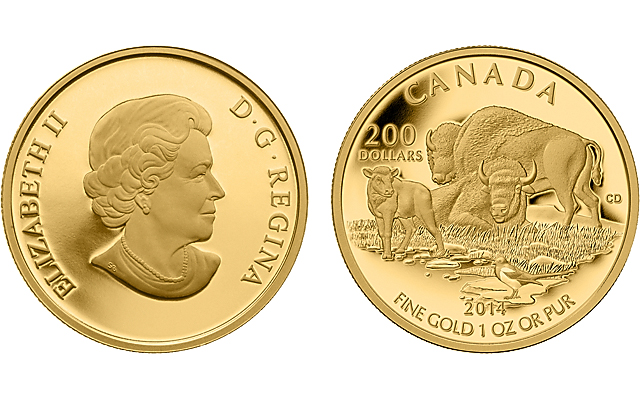 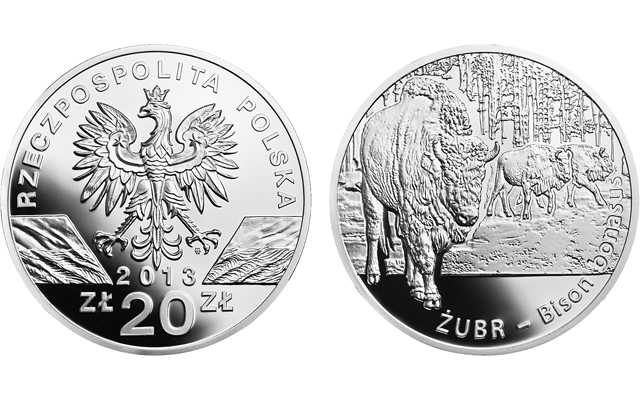 The natural habitat of European bison is seen on a Proof silver 20-zloty coin from Poland issued in November 2013. 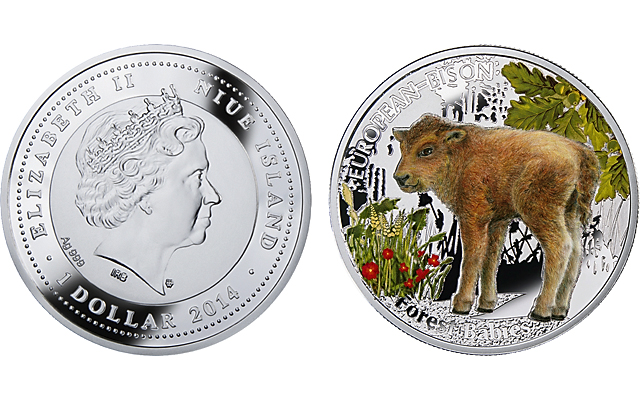 Editor's note: The following is the second of a multi-part Coin World series about the prominence of bison on coins from all over the world prepared by Jeff Starck for the August 2014 monthly edition of Coin World.

A dramatic display of strength, as bulls battle for supremacy, is captured on the reverse of a Proof .999 fine silver 20-ruble coin from Belarus.

Synthetic crystals substitute for the eyes on this coin. The bull on the right has a forepaw raised, representing the action scene unfolding on the coin.

European bison males (bulls) often lock horns in fights for dominance and an opportunity to mate with female bison (cows).

American bison also engage in these battles, and a scene on another of the Proof silver $20 coins from Canada depicts this showdown.

Two plains bison bulls lock horns and butt heads on the design, as the hooves of the charging suitors kick up dust in a design by wildlife artist Claudio D’Angelo. This coin was released April 1, and its design was modified slightly from a Proof 1-ounce .9995 platinum $300 coin issued last fall with the title “The Bison — Challenge For Power.”

Generally docile, a bison will react aggressively when provoked or if it has to defend its young — and also during the summer mating season.

“Should one bull challenge another’s claim to a mate, either will attempt to assert itself by snorting and stamping at the ground,” according to the Royal Canadian Mint. “When this fails to discourage the challenger, a battle of wills ensues as the two competing suitors charge each other and butt heads in a display of brute force amidst the open prairie landscape.”

In a scene signifying that one such ritual has been completed, the “Bull and His Mate” can be seen on another of the Proof silver $20 coins in Canada’s four-coin series, this scene designed by Trevor Tennant.

Home on the Plains

On coinage designs, bison are most commonly found amid their natural habitats like the open prairie landscape.

D’Angelo’s design for the “Bison: A Family at Rest” Proof silver $20 coin (the final one in the series) shows a male and female bison with “a young calf symbolizing, perhaps, the promise of a brighter future for the species with each new generation,” according to the RCM.

The male stands guard and the female rests on the ground, while the calf studies a black-billed magpie in the foreground.

Canada’s next batch of collector coins, due for release Aug. 5, includes a Proof silver $10 coin and a Proof gold $5 coin, both from the “O Canada!” series.

A single example of the majestic mammal appears on the gold coin.

Three adults joined by a calf appear on the silver coin. The largest adult has its head slightly raised as though it is listening and watching for danger.

The European bison resides in a habitat similar to that of the North American bison, but across an ocean on a different continent. That habitat includes the forest edges, where three adult bison are found in a scene on the Mint of Poland’s 2013 silver 20-zloty collector coin in the Animals of the World series. These coins were released Nov. 20, 2013.

The Mint of Poland returned to the forest with the April 2014 release of the Forest Babies, European Bison coin. The Proof .999 fine silver dollar for Niue shows a bison calf in a colorful forest image created by an unnamed young Polish artist.

The program is intended to interest young people in coin collecting and was “reprinted from a drawing with the help of advanced digital technology,” according to the Mint of Poland, who did not disclose the process.

Check back with CoinWorld.com for the rest of Jeff Starck's feature. Or, better yet, let us tell you when the latest post is up: