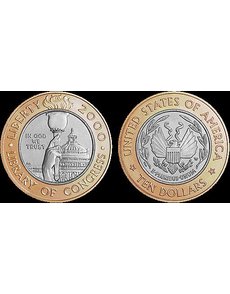 The Treasury Department seized upon the generous nature of Congress to accept the opportunity to produce in 2000 a platinum and gold ringed-bimetallic $10 commemorative coin honoring the Library of Congress. Sales did not meet expectations.

The U.S. Mint is currently in a period of experimentation and creativity. The year 2013 will see the release of the first Reverse Proof American Buffalo gold $50 coin and a three-finish Enhanced Uncirculated American Eagle silver dollar. These novel issues are, in part, enabled by new tools — such as laser frosting — that aid die preparation and allow previously unseen variations and combinations. In addition to technological advances, two other factors also make these issues possible.

First, right now, bullion programs are very popular. The Mint knows it will sell enough coins to justify the production of these issues.

Second, the Mint (technically the secretary of the Treasury) has the authority to produce versions of U.S. bullion coins for collectors at its discretion, provided the composition of those coins, i.e. their weight, fineness, dimensions, conform to the congressionally authorized requirements.

For better or worse, the Mint can’t produce whatever coins it wants. It operates at the behest of Congress, which mandates which coins to strike, what their composition will be, and, in the case of commemorative coins, how many. But when the Mint is given a little latitude by Congress, it can and does break new ground.

The best example of this is a commemorative coin from 2000, the Library of Congress ringed bimetallic $10 coin. To honor the 200th anniversary of the library, Congress authorized the production of a commemorative silver dollar and a gold $5 coin.

The legislation, however, gave the secretary of the Treasury a compelling option: instead of producing the gold $5 coin, the secretary could produce a gold and platinum ringed-bimetallic $10 coin at specifications of his choosing.

The opportunity was seized.

The ringed-bimetallic $10 coin consists of a pure platinum core surrounded by a .9167 fine gold ring.

The two separate pieces were fused together during striking, when pressure from the dies expanded both parts, locking them together.

The Mint’s marketing hailed this coin as a “spectacular first for the new century and the millennium.”

Unfortunately, this experiment didn’t end well for the Mint. Had the program done better, likely more ringed-bimetallic issues would have followed, but only 7,261 Uncirculated and 27,445 Proof examples were sold.

At the time, many blamed poor sales on an excessive focus on new State quarter dollars and the high issue price of a gold and platinum coin, then about $400.

As a low mintage commemorative and the only ringed-bimetallic U.S. coin, it’s worth substantially more today and one of the most coveted modern commemorative issues.