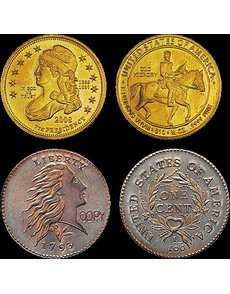 Legislation is now pending in Congress that would expand the Hobby Protection Act to cover sales of replica numismatic items that violate the act, and also afford greater trademark protection to grading services’ slabs.

The amendment seeks to strengthen the act was introduced in response to the growing concern about the proliferation of counterfeit U.S. coins produced in China, or anywhere else, and sold in the United States.

Counterfeit grading service slabs are also being produced in China and sold into the U.S. market.

Attorney and Coin World columnist Armen R. Vartian notes that the Hobby Protection Act “does not punish the actual sale of such items in the United States.”

Collectors and dealers have reported the sale of counterfeit coins manufactured in China through online auction sites, flea markets and other venues, though few criminal prosecutions have been brought against the sellers under counterfeiting laws.

Currently the Hobby Protection Act regulates the manufacture of reproductions of numismatic and political replicas, including copies of such items as Colonial coins, pioneer gold coins and paper money. Such replicas must be marked with the word “copy” on one side.

The new legislation, in addition to making it a violation of the act to aid those making, importing or selling unmarked numismatic replicas, would also add a section to the act on trademark violations regarding the “unauthorized use of registered trademarks belonging to a collectibles certification service,” which is defined in the legislation as “a person recognized by collectors for providing independent certification that collectible items are genuine.”

The legislation would have to be approved by Congress and signed by President Obama before it could become law.

The legislation would “provide needed ‘teeth’ for the Hobby Protection Act by adding language clearly and specifically targeting” manufacturers, importers, or sellers of counterfeit items — expanding the act beyond distribution to sales and marketing, according to a news release from the Industry Council for Tangible Assets Inc.

“Although a few private lawsuits have been fought over Chinese counterfeits with some success, law enforcement and plaintiffs have been discouraged by the limited rights and remedies available to them under the Hobby Protection Act,” according to ICTA.

Congress approved the Hobby Protection Act on Nov. 29, 1973. The act currently requires manufacturers and importers of “imitation political items,” defined as “an item which purports to be, but in fact is not, an original numismatic item or which is a reproduction, copy, or counterfeit of an original numismatic item,” to mark such items “plainly and permanently” with the word “copy.”

The act designated the Federal Trade Commission to develop regulations regarding how the marking would be carried out. The FTC issued its Rules and Regulations in 1975 under the Hobby Protection Act. Those rules established the sizes and dimensions of the letters and numerals to be used as well as the location of the markings.

The rule was amended in 1988 to provide additional guidance on the minimum size of letters for the word “copy” as a proportion of the diameter of the coin reproductions.

According to the FTC, before the 1988 amendment, “if the coin were too small to comply with the minimum letter size requirements, the manufacturer or importer had to individually request from the commission a variance from those requirements.”

Because imitation miniature coins were becoming more common, the FTC decided to allow the word “copy” on miniature imitation coins “in sizes that could be reduced proportionally with the size of the item.”

“The most effective approach to stopping the flow into the U.S. market of counterfeit coins from China would be to add force to the existing Hobby Protection Act,” according to ICTA.

ICTA is calling on dealers and collectors in the rare coin, currency and precious metals hobby to contact their member of Congress and urge them to support H.R. 5977.

The legislation is considered by supporters as “revenue neutral” so there is no political downside for members of Congress, according to ICTA.

To find your member of the U.S. House of Representatives visit the website www.house.gov and follow the prompts.¦