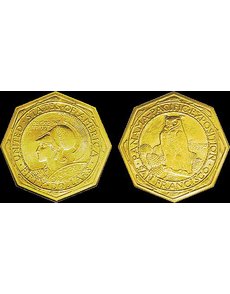 The designs of the 1915-S Panama-Pacific International Exposition gold $50 coins could be replicated on 2017 gold $5 coins if legislation now pending in Congress becomes law. The 2017 coins would celebrate the 2015 centennial of the exposition.

Five commemorative coins to celebrate the centennial of the 1915 Panama-Pacific International Exposition and the opening of the Panama Canal are the focus of legislation introduced July 19 by Rep. Nancy Pelosi, D-Calif.

The legislation, H.R. 2760, stipulates that the designs of the 2017 commemoratives should be “a close likeness” of the designs of all five coins dated 1915 that were issued in connection with the Panama-Pacific International Expo.

If approved by Congress and signed into law by the president, H.R. 2760 would also offer the option to make a circulating copper-nickel clad half dollar with designs resembling the 1915 Panama-Pacific silver half dollar.

Congress authorized the U.S. Mint to issue five different coins to 1915 in connection with the expo. The coins were struck at the San Francisco Mint and were the first commemorative coins to bear the motto IN GOD WE TRUST.

The 1915 coins were a silver half dollar and four gold coins in denominations of $1, $2.50 and $50, the latter offered in round and octagonal versions.

For the noncirculating coin program, H.R. 2760 similarly calls for production of five coins:

In addition, the designs of the latter coin could also be used on a circulating copper-nickel clad half dollar for as many as five consecutive years, starting in 2017, if the Treasury secretary authorizes the coins’ production and release.

If this provision were enacted, the half dollar would be produced in two compositions, 90 percent silver and copper-nickel clad.

The legislation specifies that the designs of the new coins be based on the 1915 coins, with design details written into the legislation.

Designs of the gold $5 coins would be based on Robert Aitken’s designs used for the 1915 program’s gold $50 coins.

The gold $2.50 coin would based on the 1915 obverse design by Mint Chief Engraver Charles Barber and reverse design by George T. Morgan, assistant engraver at the Bureau of the Mint in 1915.

The gold dollar would be based on the obverse and reverse designs by Charles Keck.

The legislation stipulates the surcharges would go to the “San Francisco Museum and Historical Society for the design and construction of appropriate exhibitions in the San Francisco Museum and Historical Society, including the necessary adaptive reuse of the Old Mint, commemorating the Panama-Pacific International Exposition, as well as the development of appropriate exhibitions at the Palace of Fine Arts on the grounds of the former Panama-Pacific International Exposition.” ¦