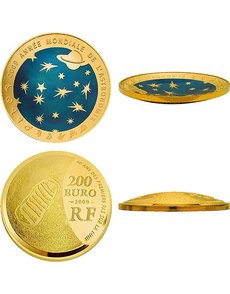 New legislation before the U.S. House of Representatives seeks 2015 coins commemorating the National Baseball Hall of Fame bearing a design style that would emulate an innovative technique used on 2009 French coinage, with the obverse design to be selected through a competition.

The bill, H.R. 2527, was introduced July 14 and already has 293 co-sponsors, enough under House rules to permit the measure to move forward for a vote.

The bill was introduced by Rep. Richard L. Hanna, R-N.Y. The Baseball Hall of Fame resides in Cooperstown, N.Y., a location within Hanna’s 24th District of New York. The hall of fame would receive the surcharges raised through the sale of the coins.

If the measure becomes law, the coins would be issued in 2015, which is not an anniversary year either for the hall of fame, which opened in 1939, or for baseball.

Two provisions in the measure are somewhat unusual, both related to the designs of the coin: one provision would require a design competition for the obverse of the three coins (the reverse of each coin is to depict a baseball); the other is a “sense of Congress” provision directing the U.S. Mint to emulate the French Mint.

“It is the sense of Congress that coins minted under this Act should be produced in a fashion similar to the 2009 International Year of Astronomy coins issued by the Monnaie de Paris, the French Mint, so that the reverse of the coin is convex to more closely resemble a baseball and the obverse concave, providing a more-dramatic display of the obverse design chosen pursuant to section 4(c).”

The other unusual provision appears in referenced section 4(c); it calls for the Treasury secretary to conduct a competition to select the obverse design (the language of the bill refers to a solitary obverse design for the three coins). In addition, each winning design would have to be accompanied by a plaster model. The winner of the competition would be compensated with at least $5,000, with the amount determined by the Treasury secretary.

The Treasury secretary would make the final design selection after consultation with the National Baseball Hall of Fame and the Commission of Fine Arts, and a review of the design by the Citizens Coinage Advisory Committee. The competition would be judged by a six-person jury consisting of three members each from the CFA and CCAC, with the panels selecting their members.