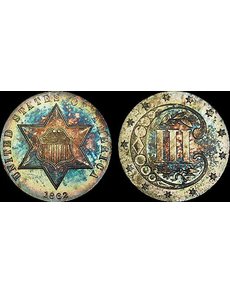 One of the great pleasures of major auctions is that collections are offered that can really help define the market for a given series. At Heritage’s recent Florida United Numismatists auction, the Walter Freeman Collection of silver 3-cent pieces shows that collectors have a hearty appetite for these diminutive coins.

The near-complete collection of Mint State and Proof issues was housed in old-style Numismatic Guaranty Corp. holders. In a market that values freshness, these coins represented an unusual buying opportunity and bidders undoubtedly saw upgrade potential in many of the lots.

The issue’s resemblance to a dime lent it the nickname “trime.” Three distinct design subtypes are collected.

Prices for problem-free circulated examples have risen in the past decade as collectors become more aware of their relative scarcity.

Examples in top grades have also seen increased interest over the past few years. As evidence of the robust demand in top grades for the series, 18 different pieces from the Freeman Collection realized more than $10,000 each.

The collection’s top lot was an 1855 silver 3-cent coin graded Proof 65 that sold for $44,062.50. The catalog description noted that the Proof issue, “never distributed in large quantities, today is a rarity regardless of grade with only 50 or so surviving specimens estimated. In a broader sense, as a representative of the Type Two design in proof, it is also a category rarity as well.”

An 1869 3-cent coin graded Mint State 67 was the numerically highest-graded piece in the collection. It realized $41,125.

Many coins sold for multiples of what comparably graded examples would be expected to sell for. An 1862 3-cent coin graded Proof 65 with rich multi-colored toning realized $6,462.50 — far more than the $1,300 to $1,400 range that peer examples have been trading for at auction. If this coin returns to market, one should not be surprised to see it housed in a new holder at a higher grade. ¦