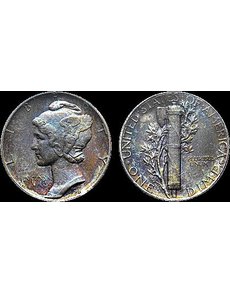 This 1916 Winged Liberty Head dime pattern, one of two known in private collections, is the type of rarity that generates excitement at ANA auctions. It is being offered by Heritage on Aug. 3.

This month numismatic eyes are on the American Numismatic Association World’s Fair of Money in Philadelphia, Aug. 7 to 11.

The massive show features a huge bourse floor full of dealers, thousands of auction lots and hopefully a wide turn-out of collectors ready to add coins to their collection. The show — along with the official pre-show — also serves as a chance for dealers to restock their inventories and get fresh coins to offer their clients.

A huge amount of money changes hands during this time period. In 2011, just the auctions around and during the big ANA show realized more than $71 million across more than 16,000 lots. In 2010 the auctions during and around ANA realized $60 million.

To fully participate in the action, dealers will have to spend a lot of time in “The City of Brotherly Love.” Heritage starts things off with auctions Aug. 2 to 5, including its Platinum Night auction featuring almost 500 high-end rarities Aug. 3. Yet, when one considers that dealers typically view the lots prior to the auctions, to fully participate in the ANA auctions and show means substantial commitment of resources — both time and money — for dealers.

Stack’s Bowers Galleries, the official ANA auctioneer, begins its activities Aug. 4 with its pre-ANA auction, with the main event starting on Aug. 7. By the time the firm’s final Internet only session ends Aug. 14, coin buyers will have had nearly two weeks of almost nonstop coin auctions.

Both auction houses are presenting a diverse group of coins; a blend of the typical collector classics that dealers stock in inventory and ultra-rarities in the six- and seven-figure range for the advanced collector and investment crowd. Assuming that consignors have reasonable expectations and the coins aren’t hampered by massive reserves, the results of these auctions will provide a broad test of the coin market and give useful evidence of where there is strength and weakness across multiple market sectors.

Thousands of individual transactions are expected at dealer tables, in closed hotel rooms and between collectors on the show floor. On-site grading from major grading services will provide some lucky submitters with upgrades, and provide an easy avenue for other, fresh material to enter the market.

The coin market continues to show steady strength and one gets the sense that coin buyers think that coins are a good store of wealth, at least coins that are high quality for their grades. The market for expensive coins seems to show few limits, especially when well-heeled coin buyers consider the upside appreciation of a coin versus the average 5-year certificate of deposit at a bank that is currently at just over 1 percent.

While coins don’t pay interest, buyers find them much more fun to own. ¦