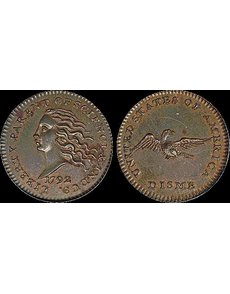 This rare copper pattern 1792 disme graded Proof 62 brown by Numismatic Guaranty Corp. is described in Heritage’s catalog as among the finest available and “probably the second or third finest known” of the type.

Each spring and fall in New York, major fine art auctions test the strength of the current market for rare objects. Auctions in nearly all collectible markets test the confidence of buyers and sellers.

Broadly speaking, the prices realized test the strength of buyers while the pieces offered test the confidence of sellers.

Around $1 billion in art is expected to change hands at Christie’s and Sotheby’s this November and these auctions attract the attention of mainstream media.

Kelly Crow, writing in the Oct. 4 Wall Street Journal, made a statement on the current art market that applies — nearly verbatim — to the current quality and rarity driven rare coin market.

She wrote: “The alchemy of what’s selling, or not, can swing wildly in any given season depending on what turns up in the marketplace, but dealers say the overriding dynamic now is one of polarization. Collectors remain eager to splurge on masterpieces, but they’re turning their noses up at anything that appears second-tier. That’s creating a top-heavy atmosphere that feels heady yet unstable — especially since the majority of artworks trade below the million-dollar mark, dealers say.”

Indeed the current coin market is one in which rarities continue to soar, classic bread and butter coins maintain, and low quality coins are sold at discounts.

A recent example of the strength at the top in a global perspective was seen with the recent sale of an Australian 1920-S gold sovereign that sold in excess of $1.2 million when offered in a London auction.

Will that single transaction reset prices for all Australian coins? Likely not. Yet, these classic rarities are as close as the hobby has to “brand names” that are guaranteed to separate the best from the rest.

Heritage’s Oct. 18 to 21 auction held in conjunction with the American Numismatic Association’s show in Dallas is the market’s first major auction in more than a month. A highlight of the auction is a rare pattern 1792 disme that at the time of writing (Oct. 10) has already received bids in excess of $300,000.

Also in the auction is a 1793 Flowing Hair, Wreath cent graded Specimen 66 brown by Numismatic Guaranty Corp. that has broken the six-figure mark in pre-auction online bidding. It is described as “a true ‘museum quality’ coin.” ¦