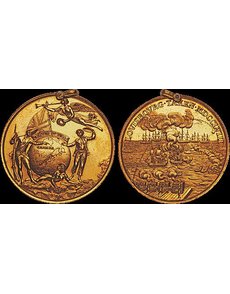 This 1758 Louisbourg Taken medal in gold, graded choice About Uncirculated, and one of only a handful of examples known, was one of the auction lots where a portion of the final hammer price and buyer’s fee was donated to the National Numismatic Collection at the Smithsonian Institution’s Museum of American History.

A total of $401,009 was raised to benefit the National Numismatic Collection at the Smithsonian Institution’s Museum of American History from January’s sale by Heritage Numismatic Auctions of donated auction lots.

The donated auction lots were interspersed among the U.S. coin, medal, token and paper money lots offered in separate sessions in conjunction with the Florida United Numismatists convention. The donated lots comprised 225 coin lots and five paper money lots, according to Heritage officials. In addition, the total raised in the auction included several miscellaneous cash donations.

Smithsonian officials were ecstatic with the outcome of the auction and its final tally.

“The Smithsonian is grateful to Heritage Auctions for the exceptional job it did in raising very significant funds to benefit the National Numismatic Collection,” said Marc Pachter, interim director of the Smithsonian Institution National Museum of American History. “In this day and age of fundraising challenges for all public institutions, it’s gratifying to us that Heritage and its clients gave so generously to this most worthwhile cause. We’re thrilled with the results.”

Heritage waived all buyer’s and seller’s fees on the donated lots in the FUN auction, with 100 percent of all money raised going to the endowment for collection at the Smithsonian.

Heritage President Greg Rohan said that on the Smithsonian lots, all or a portion of the hammer price went to the museum, with Heritage donating that same percentage of the buyer’s fee.

Rohan added, “I should also point out that Heritage also underwrote everything to do with the auction. 100 percent of the money designated for the museum, went to the museum.” ¦