Because it is interesting 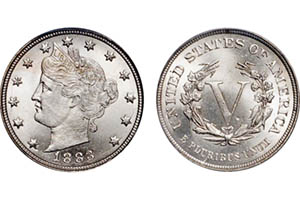 An inexpensive 1883 Liberty Head, Without CENTS 5-cent coin is a great addition to a collection. In More Adventures with Rare Coins, published in 2002, I wrote an entire chapter about this coin!

One way to collect is to buy coins, tokens, medals, or bank notes that have interesting stories.

This can be a fun way to go. In the March Monthly Edition of Coin World, Gerald Tebben contributed “Collecting History: The $100 Coin Collection.” His philosophy resonated with me. For a modest budget, you can acquire a 1909 Lincoln, V.D.B. cent, an 1883 Liberty Head, No CENTS 5-cent coin, and nice other coins, each with a story.

If I walked into a coin club meeting one evening and was told, “We have no speaker. Can you say something?” I could talk for a half hour on the 1909 V.D.B. cent and another half hour on the 1883 5-cent coin. The “catch,” if there is one, to the $100 collection is that the cent is “only” Mint State 60 and the 5-cent coin checks in as Very Fine.

In the same issue of Coin World, I saw that a Proof 67 Deep Cameo Franklin half dollar is valued at $1,750 — or an amount that would buy 17 of Tebben’s $100 collections. If you asked me to speak about that 1955 Franklin half dollar and not digress into 1955 history in general (such as what President Eisenhower was doing or the biography of Franklin, or the 1955 Lincoln, Doubled Die cent) I am afraid that I could not use up five minutes on the coin alone.

Many people have a completely different mind-set. More than just a few would rather have that single half dollar at the 67 level than a complete collection of Franklin halves of 1948 to 1953, Proof and circulation strikes, in Proof and MS-63, for the same $1,750, with enough money left over to buy a few of Tebben’s $100 sets. Unless you have a large amount of money to spend on coins, if you concentrate only on ultra-grade coins, you will have a very small collection. On the other hand, if you don’t have to own the finest quality in the marketplace, you can build a fascinating collection with many different pieces, each with a story.

There is a nice advantage to this. So many buyers have rushed to acquire ultra-quality coins that in such fascinating fields, at least to me, as 1892 to 1954 silver commemoratives, Liberty Head 5-cent coins, and Indian Head cents, such desirable grades as MS-63 and 64 are cheaper now than they were 20 years ago!

Some, such as MS-65 commemoratives, cost less now than they did a quarter century ago, in 1989! I could probably speak for at least a half hour on each commemorative design, and for some, talking for an hour would be easy.

When you contemplate a coin, ask yourself, “Does it have an interesting story to tell me?”