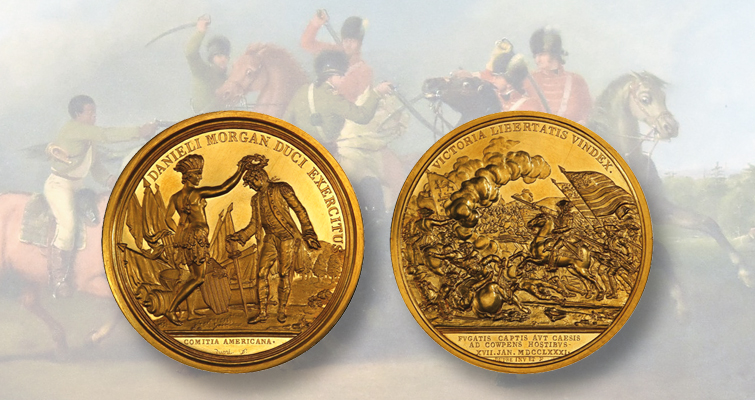 Congressional gold medal was awarded to Continental Army Brig. Gen. Daniel Morgan for his heroics during the Battle of Cowpens fought on Jan. 17, 1781.

Untraced for the past 137 years, a replacement medal for the original congressional gold medal awarded to Continental Army Brig. Gen. Daniel Morgan for his heroics during the Battle of Cowpens Jan. 17, 1781, has resurfaced.

The unique gold medal, the only known Comitia Americana medal in gold in private hands, is being offered by Stack’s Bowers Galleries during the April 4 to 8 sale held in conjunction with the Whitman Baltimore Coin and Collectibles Expo.

According to Stack’s Bowers auction catalogers, the Daniel Morgan at Cowpens medal was initially authorized by the Continental Congress in March 1781.

The Cowpens medal was designed by French engraver Augustin Dupré, noted for his designs for the Libertas Americana medal.

Dupré’s obverse design for the Cowpens medal depicts a Native American woman symbolizing America crowning the victorious general with a laurel wreath, with trophies in the background, according to R.W. Julian in his reference Medals of the United States Mint: The First Century 1792–1892.

The reverse design for the 56-millimeter medal reflects a battle scene with VICTORIA LIBERTATIS VINDEX (translating to “the protector of freedom”) above and in exergue, FVGATIS CAPTIS AVT CAESIS AD COWPENS HOSTIBVS, XVII. JAN. MDCCLXXXI (“The enemy put to flight, taken, or slain at Cowpens, January 17, 1781”).

Dupré signed the obverse DUPRE F. at the bottom and the reverse DUPRE INV. ET. F. at the lower edge to indicate he was responsible for the medal designs.

The gold medal was struck at the Paris Mint. Silver and bronze duplicates were also struck.

According to Julian, Daniel Morgan received his gold medal in late 1789 or early 1790. With Morgan’s death in 1802, the medal passed to his family.

According to the auction lot narrative, the original gold medal presented to Morgan was lost in 1818, having been stolen from the Pittsburgh home of Morgan Neville, Morgan’s grandson and oldest male heir.

Congress acquiesced in 1836, legislating a replacement medal for the stolen original. The replacement medal was struck in 1839 at the Philadelphia Mint and presented in 1841, according to Stack’s Bowers auction lot description, to Morgan Neville’s son.

Dies for the replacement medal were duplicated from a silver version of the medal owned by Daniel Webster.

Lewis Cass, the American minister to France, commissioned French engraver M. Barre to cut the copy dies that were finished by Aug. 17, 1839.

The replacement medal according to Julian, contains 4.79 ounces or 148.99 grams of fine gold.

The replacement medal — the medal being offered by Stack’s Bowers Galleries — remained in the Neville family’s possession until at least 1885.

Sometime afterward, the replacement medal was acquired by American financier and investment banker John Pierpont Morgan, under the mistaken belief he was related to Daniel Morgan.

The replacement medal remained underground until this piece, still in its box of issue, resurfaced in the past several months.

“When Anthony Wayne’s Comitia Americana medal in gold was purchased by the Pennsylvania Sons of the American Revolution at Sotheby’s in 1978 for the world-record sum of $51,000, most collectors believed they would never again have the opportunity to own a Comitia Americana medal in gold,” notes Stack’s Bowers Galleries consultant John Kraljevich, who cataloged the medal for the upcoming auction. “All the others were permanently included in museum collections, from George Washington’s personal medal at the Boston Public Library to Nathanael Greene’s at the Rhode Island Historical Society.

“The 1839 Morgan medal was assumed to have been lost or melted, like its predecessor medal. Its appearance represents the most shocking and important discovery in American numismatics in years.”

The Cowpens medal is considered by many medallic artists to be the most awe-inspiring of the Comitia Americana medals, inspiring designs of later congressional gold medals authorized to recognize heroes of the War of 1812.

According to the Smithsonian Institution’s National Museum of American History, “The Comitia Americana series memorializes some of the pivotal moments of the American Revolutionary War. The series was created between 1776 and the early 19th century almost exclusively by French artists and artisans at the commission of the United States.

“The name of the series, Latin for American Congress, denotes that these medals were created after Continental Congressional votes to memorialize the heroism, friendship, and leadership of key American and French revolutionaries. Each medal was struck either at the Paris Mint or the United States Mint in Philadelphia.”

Details on the Comitia Americana medal series can be found online at https://www.si.edu/spotlight/comitia-americana-medals. 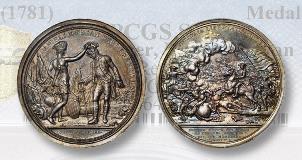 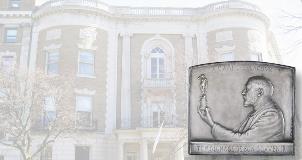 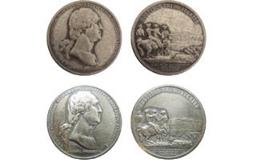