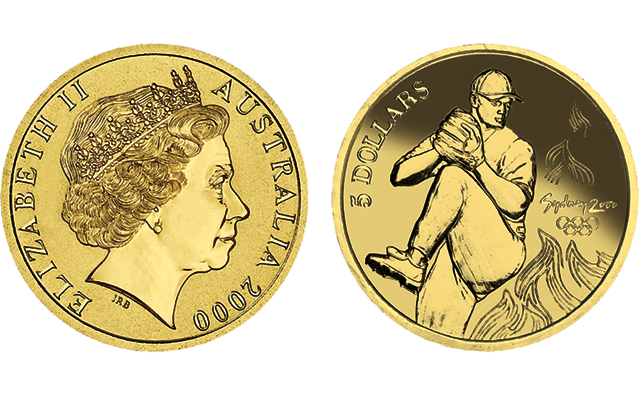 Australia’s Olympic coin program in 2000 included a bronze $5 coin celebrating one part of the pitcher-batter confrontation, the pitcher. Though baseball was short-lived as an official Olympic sport, it remains contested on an international stage today.

While it may come as a surprise to Americans, it was not until 1992 that baseball debuted as an official Olympic sport.

That year the Royal Spanish Mint as part of the host country series of Olympic coins honored the sport on a gold 10,000-peseta coin. The design reminds collectors of the physics involved in the game.

An abstract design highlights the pitcher’s role in the choreography of an at-bat, which culminates in the swing of a baseball bat, the burst of kinetic energy as the barrel rushes to meet the spinning orb coming from the pitcher’s hand.

In 2000, Australia showed the other half of that tandem, the pitcher, during his wind-up, the ball about to sail into history. Though not considered a powerhouse, Australia has sent several players to the major leagues, and even earned a silver medal during the 2004 Summer Olympics.

Australia is one of six different countries to earn gold, silver or bronze during the five Olympic contests held from 1992 until the sport’s final bow in 2008.