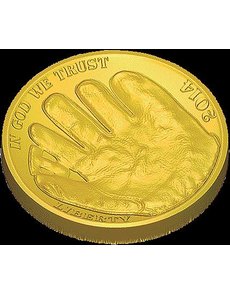 The Fayette, Maine, collector who submitted this design May 11 captures the three-dimensional concavity as his design might appear on the gold $5 half eagle. “... I sculpted a baseball glove that was in use in the 1930’s and 1940’s and because it was just like the glove that my father used when we played baseball together when I was very young boy,” according to the designer’s narrative that accompanied this design submission.

The five judges are all members of the Major League Baseball’s Hall of Fame. They began deliberating June 5 on 24 designs that are in competition for use on the concave common obverse of the 2014 gold $5 half eagle, silver dollar and copper-nickel half dollar coins that will honor the Hall of Fame.

The semifinalist designs were posted online June 5 at batterup.challenge.gov/submissions. Twenty-two of the 24 designs were submitted with a thematic title, with one entry referencing just the United States Mint’s Baseball Coin Design Competition and another entry also including the name of the designer in addition to referencing the design contest.

Each of the five judges is conducting a separate review, independent of the others, and ranking the 24 designs in numerical order, according to Horn.

From those 24 designs will come the finalist designs, the number of which is yet to be determined, Horn said June 5.

The 24 semifinalist designs were pared down from 178 designs submitted between noon Eastern Daylight Time April 11 through 5 p.m. EDT May 11. The paring down was completed by a U.S. Mint cross-functional team.

Three United States Mint engravers and one Bureau of Engraving and Printing bank note designer first completed an artistic review of the submitted designs for the program.

The designs were further evaluated for appropriateness of the subject matter and coinability by both the National Baseball Hall of Fame and by several members of the Mint’s manufacturing and engraving staff, according to United States Mint spokesman Michael White.

The finalist designs will be evaluated by both the Commission of Fine Arts and Citizens Coinage Advisory Committee in July for their recommendations. The final adopted design will be selected by the Treasury secretary in consultation with the National Baseball Hall of Fame.

The Treasury secretary’s final selection is to be announced sometime in September along with the selection of the final design for the common reverse.

The winning designer of the Baseball Coin Design Competition is to receive compensation of no less than $5,000, according to provisions of the enabling legislation, Public Law Public Law 112-152, and will have his or her initials appear on the three commemorative coins along with those of the member of the U.S. Mint’s engraving staff assigned to sculpture the design.

The winning obverse design — which will appear concave on the three commemorative coin compositions and denominations — will be paired with the common reverse design.

The reverse design, according to provisions of Public Law Public Law 112-152, is to resemble the style of baseball used by Major League Baseball.

The CFA and CCAC have already reviewed and recommended proposed designs rendered by members of the U.S. Mint’s engraving staff and outside artists in the U.S. Mint’s Artistic Infusion Program.

Originally, just the half eagle and silver dollar were to be struck with a concave obverse and convex reverse, according to law provisions, but U.S. Mint officials subsequently decided to include the half dollar as well. ¦