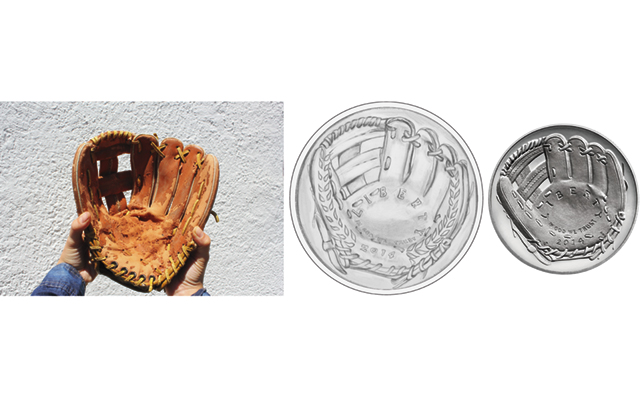 National Baseball Hall of Fame offiicials extended kudos not only to the U.S. Mint in executing the Baseball commemorative coin designs, but in their development.

Ken Meifert, vice president of sponsorship and development for the National Baseball Hall of Fame and Museum in Cooperstown, N.Y., praised the baseball glove obverse design by California artist Cassie McFarland and the baseball reverse by U.S. Mint Sculptor-Engraver Donald Everhart II, who sculptured both designs in model form.

As part of the open design competition, Meifert secured the participation of five Hall of Famers — Brooks Robinson, Joe Morgan, Ozzie Smith, Dave Winfield and Don Sutton — who independently reviewed the 178 designs submitted by the public from which McFarland’s design was ultimately selected.

Meifert said while the designs are simplistic, they strongly complement one another. They evoke childhood memories of the sport, of playing catch with a parent or sibling, Meifert said.

McFarland donated to the Hall of Fame and Museum her childhood baseball glove that inspired the obverse design.

And, according to Meifert, Everhart’s baseball reverse includes the style of the 108 double stitches that identifies the ball as a Major League baseball.