Baseball half to be in concave/convex style 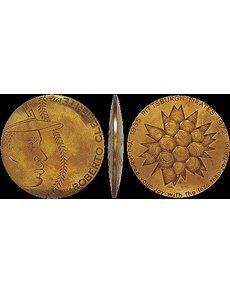 The U.S. Mint has had some experience dealing with dies imparting convex designs, like those used to strike the obverse and reverse of the 1973 Roberto Clemente congressional gold medal.

The 2014 National Baseball Hall of Fame copper-nickel clad half dollar will be produced in the same concave obverse and convex reverse shape to be employed for the gold $5 half eagle and silver dollar.

“We’re happy to not only meet, but also exceed, Congress’s expectations by minting the half dollar clad coin in the same unique shape as the other National Baseball Hall of Fame commemorative coins to accommodate the broadest range of our customers at the most affordable price,” Acting U.S. Mint Director Dick Peterson announced May 7.

U.S. Mint spokesman Michael White said that the commemorative half dollar will be struck on the standard 30.6-millimeter, 11.34-gram half dollar planchet on which Kennedy half dollars are currently produced.

The National Baseball Hall of Fame Commemorative Coin Act (Public Law 112-152) authorizes a three-coin program and mandates a public competition to select a common obverse design emblematic of the game of baseball.

Treasury Secretary Jacob J. Lew has not yet announced his approved selection for the common reverse from among designs executed by the U.S. Mint’s engraving staff and Artistic Infusion Program and reviewed by the Commission of Fine Arts and Citizens Coinage Advisory Committee.

The common reverse is to be representative of a baseball similar to that used by Major League Baseball.

The common obverse will be selected from entries in the design competition that ran from noon Eastern Daylight Time April 11 through noon May 11, in which U.S. citizens and permanent residents ages 14 and older could participate.

Submitted designs will be reviewed by a panel of five members of the Baseball Hall of Fame before evaluation by members of the Commission of Fine Arts and Citizens Coinage Advisory Committee.

Through experimentation and the production of test strikes, according to Mint officials, the U.S. Mint has not only demonstrated that it can produce the silver and gold coins in the concave/convex style sought by Congress, but that it also has capacity to produce the half dollars in the same style. The convex/concave shape will be a first in the bureau’s history for coinage.

However, the United States Mint has had some experience dealing with dies imparting convex designs, such as those used to strike the obverse and reverse of the 1973 Roberto Clemente congressional gold medal honoring that baseball legend. ¦