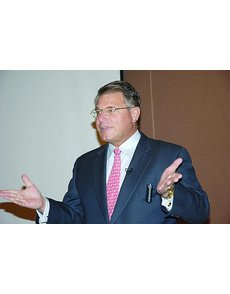 Acting U.S. Mint Director Richard A. Peterson said the concave-convex shape to be used for the 2014 National Baseball Hall of Fame half dollar was adjusted after problems were discovered during testing.

Production of the 2014 National Baseball Hall of Fame copper-nickel clad half dollar will present some striking challenges, according to Acting U.S. Mint Director Richard A. Peterson.

The common obverse will not be as concave and the common reverse not as convex as the surfaces will be on the gold $5 half eagle and silver dollar in the series, Peterson said.

Shifting of the metal during test striking, using Martha Washington nonsense dies, caused the three layers of the copper-nickel clad planchet to separate, Peterson said. As a result, the coin’s curvature has been reduced to eliminate the separation, he said.

The copper-nickel clad planchets are composed of outer layers of 75 percent copper and 25 percent nickel bonded to a core of pure copper. The gold and silver coins are both created of homogeneous alloys.

Peterson met with Coin World the morning of Aug. 13 in Rosemont, Ill., in conjunction with the American Numismatic Association World’s Fair of Money for a one-on-one interview.

The American Eagle silver bullion coin was one topic of discussion during the interview. A fourth supplier of 1-ounce .999 fine silver blanks has been added to support the record-setting production of the coins, Peterson said. The new supplier is able to provide between 50,000 and 75,000 blanks per week, a 10 percent overall increase in the total available to the Mint, he said. The Mint is on track toward breaking the 2011 sales record of more than 45 million American Eagle silver bullion coins, he said.

The Mint’s authorized purchasers are buying between 750,000 and 950,000 coins weekly. Production is divided between the West Point and San Francisco Mints, with the West Point Mint facility handling 80 percent of the total.

Because of the volume of coin and medal designs the U.S. Mint must turn into product annually, the bureau relies heavily on the artistry of its outside artists within the Artistic Infusion Program. Approximately 60 percent of the designs that make it into coin production are from AIP artists, with the remaining 40 percent generated by the Mint’s engraving staff, which also sculptures the final approved designs (both staff- and AIP-created).

Peterson commented specifically on one category of medals that has kept the Mint busy in recent years. He said congressional gold medals will be presented in 2013 to 25 different Native American tribes who had members serving as code talkers during World Wars I or II, in relaying coded messages for military operations.

Each medal bears distinctive obverse and reverse designs, for a total of 50 designs.

All of the medals are to be presented in congressional ceremonies currently scheduled for Nov. 20.

Peterson was asked why the U.S. Mint continues to sell products from one year into the next, instead of melting the unsold products soon upon completion of the calendar year in which the products were produced.

Peterson answered that the Mint has to schedule melting time with the same vendors that supply the Mint with coinage blanks.

Product continues to be sold while inventory lasts, he said. Melting times are staggered through the calendar year as a result, Peterson said.

The Mint is at least a year away from implementing an order management system that is state of the art.

Peterson said a new system will be able to provide the bureau with much needed data as to what’s selling, who is buying the products and what other products they might be interested in, Peterson said.

The current system can handle no more than 5,000 orders per hour. Receiving any more risks system failure that generates automatic emails informing customers that their orders have been canceled, he said.

Peterson said the Mint is considering securing retail space in the tourist sections of the same cities where its production facilities and sales centers are.

Aramark oversees the sales centers at the Philadelphia and Denver Mints, with the Mint drawing revenue from sales of non-numismatic items, such as T-shirts, key chains and more. The Mint operates a sales center in its headquarters, as well as at Union Station, both in Washington, D.C.

“People like to touch the product,” Peterson said. “If they can see it for real, you can sell more.”

The U.S. Mint is currently working from a detailed five-year plan that outlines annual and special numismatic products that will be offered through 2017, Peterson said.

Among the products for 2013 to be offered are a three-piece set and a single-coin kids set, both honoring Theodore Roosevelt.

The Mint will also offer numismatic products in 2014 to mark the 50th anniversary of the introduction of the Kennedy half dollar, Peterson said. ¦