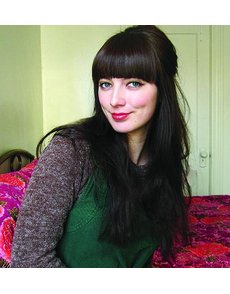 San Luis Obispo, Calif., artist Cassie McFarland is patiently waiting, wondering whether her glove design for the U.S. Mint’s Baseball Coin Design Competition will be the one ultimately selected for the common concave obverse for the three 2014 National Baseball Hall of Fame commemorative coins. 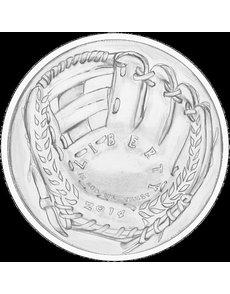 Both the CFA and CCAC suggest the removal of the wheat sheaves from McFarland’s submitted design, shown at left. Should the Treasury secretary choose her design for the common obverse for the 2014 National Baseball Hall of Fame gold $5 coin, silver dollar and copper-nickel clad half dollar, it would likely be modified.

San Luis Obispo, Calif., artist Cassie McFarland wasn’t aware until May 11 that the U.S. Mint was soliciting designs for a common obverse for the 2014 National Baseball Hall of Fame commemorative coins.

Today, her design appears to be the clear favorite for the three coins in the program — not bad for someone who almost missed the contest.

McFarland stumbled upon the U.S. Mint’s Baseball Coin Design Competition on the contest’s last day for potential designs to be submitted.

McFarland, 27, had been browsing the Internet looking for information on a series of Shell service station “Mr. President” tokens depicting U.S. presidential portraits that she recalls having collected while growing up.

A figurative oil painter, portraitist and sculptor, McFarland was seeking the token designs as inspiration for an art project she had conceived.

The baseball commemorative coin design contest link showed up during one of her Internet searches.

“I guess I typed in the right information [in the search engine],” McFarland told Coin World July 22.

Now the design that she submitted in competition with 177 other design hopefuls is just two steps away from possibly receiving final approval, after receiving the recommendations July 18 and July 23, respectively, of the two congressionally authorized review panels — the Commission of Fine Arts and the Citizens Coinage Advisory Committee.

Final approval by Treasury Secretary Jacob J. “Jack” Lew or his designee would mean a permanent place for McFarland in U.S. commemorative coin history, her initials on the obverse of three commemorative coin denominations, and compensation of at least $5,000.

To say that McFarland is ecstatic about the prospects would be an understatement.

“Oh my goodness, that’s crazy. What are the chances?” McFarland said upon learning the news. “This is all very surreal for me. I’ll have to take it one step at a time.”

Coin World interviewed McFarland on July 22, after notifying her four days earlier via a posted message on the Batterup.challenge.gov Web page that her design was recommended by the Commission of Fine Arts from among the 16 finalist designs.

McFarland was interviewed a second time by Coin World on July 23, after the CCAC concurred with the CFA’s endorsement of her design. Coin World informed McFarland about the CCAC’s recommendation.

The recommendations of both the CFA and CCAC will be taken into consideration by Acting U.S. Mint Director Richard Peterson before a final recommendation is passed on to Lew or whomever Lew designates to make the decision. On a number of previous coin and medal design decisions, Lew has deferred to Deputy Treasury Secretary Neal S. Wolin to make the final selection.

McFarland submitted her proposed design to Batterup.challenge.gov on May 11, the final day of the 30-day design competition that began April 11.

McFarland said July 23 that after locating the Mint’s coin design competition and reading the contest rules, she quickly put pencil to paper to execute a rendering that would work well if struck in a concave format. What better way to recognize the game of baseball than a baseball glove?, McFarland said.

McFarland also believed her design would pair well with the common, convex reverse depicting the type of baseball used in Major League Baseball.

The common, concave obverse and common, convex reverse selections are to be announced sometime in September.

The common reverse will be picked from designs rendered by members of the U.S. Mint’s engraving staff and its outside complement of artists under the Artistic Infusion Program.

McFarland incorporated both two-dimensional and three-dimensional elements to make her contrasted design challenging to the eyes.

McFarland said she initially thought of rendering a quirky, abstract design featuring the skin of a peanut for tactility, since in-shell peanuts are a staple at baseball parks. She abandoned that idea when she considered people with peanut allergies.

McFarland said she did not want whatever design she finally chose to submit to be “harsh and geometric.”

“I played softball as a kid and had a somewhat round glove,” McFarland said. “I wanted to make the design spheric, but still appear concave. The bumps of the laces and the wheat and concavity — I think they provide a realistic feel of holding a glove.”

After executing three slightly different baseball glove renderings using 8-inch by 8-inch circles as a design template, McFarland said she opted for her last hand-drawn piece, which had, in her opinion, the fewest mistake erasures.

“The third one was the charm,” McFarland said. “I guess I really wanted to design this coin.”

Even if she had found out about the design competition at the outset, McFarland said she likely still would have contributed her submission on the final day.

She said July 22 that she’s not sure specifically what direction her artistic talents might take.

She’s sold a number of her paintings. McFarland said San Luis Obispo is extremely supportive of its local artists, through the San Luis Obispo Arts Council’s Art After Dark program and Open Studios Art Tour, which introduces artists to the public.

McFarland said on one of her future visits to her parents’ home in northern California, she plans to look both for a coin folder of Lincoln cents her mother gave to her as a child and for a small wooden treasure chest containing coins she obtained with her father on a trip to a local coin store.

And, yes, McFarland also plans to look for that set she collected of bronze presidential tokens from Shell that inspired her Internet search that found the coin design competition.

All of the 178 proposed designs submitted for the design competition were scrutinized several times internally at the Mint for coinability and other design/production criteria before being reviewed/judged by a panel of five members of the National Baseball Hall of Fame — Brooks Robinson, Dave Winfield, Joe Morgan, Don Sutton and Ozzie Smith.

From the total submissions, the field was pared to 22, but one designer subsequently withdrew his or her design.

A gaffe by one of the members of the U.S. Mint’s internal review team who did not properly apply the contest rules meant his or her review scores were nullified. The nullification resulted in expanding that field of semifinalists, of which McFarland was one, to 26. McFarland had already made the previous semifinalist cut.

The second series of semifinalist designs were returned to the five Hall of Famer players for a second review session. Seventeen finalist designs were picked, but one was subsequently withdrawn because it did not meet certain required elements of the design contest. The Mint did not disclose what unmet contest criteria resulted in a design being withdrawn.

The CFA and CCAC conducted their subsequent review of the remaining 16 finalist designs, of which McFarland’s was one. The 16 finalist designs were posted online for public viewing on Batterup.challenge.gov on July 18, the same day they were reviewed by the CFA for its recommendation. ¦