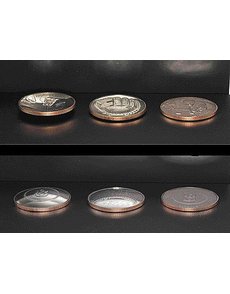 Cassie McFarland, designer of the common baseball glove obverse for the three-coin 2014 National Baseball Hall of Fame commemorative coin program, carried this silver dollar test strike, in images above and left, around during her Oct. 7 visit to U.S. Mint headquarters in Washington, D.C.

Because designs had not been selected, early testing required the use of what are called “nonsense dies,” which bear designs that are in semblance of coin designs but do not duplicate any actual coin designs. For the Baseball coin program, the Mint selected nonsense designs with a sports theme.

Nonsense designs, “featuring an 8-ball reverse and pool shooter obverse, were traditionally sculpted, 3D scanned and then digitally recreated to start the process,” said Steve Antonucci, branch manager for Digital Development, Research & Development for the U.S. Mint at Philadelphia. “These designs were intended to simulate dome configurations and height of relief details that might be encountered when the baseball designs were finally approved and sculpted.”

Antonucci said the designs were then machined on computerized numerically controlled milling equipment “directly into die form to speed up the coinability and die testing phases.”

The creation of the nonsense dies represents the first time, according to Antonucci, that the U.S. Mint has CNC-milled original dies for such a purpose.

“The efforts we’ve undertaken to produce these coins reflect the passion, pride and professionalism that the men and women of the Mint have for their work,” said Tom Jurkowsky, director of corporate communications for the U.S. Mint. “What we’ve done to prepare to mint the baseball coins may be viewed as being extraordinary. But it’s really demonstrative of how we approach all of our products with only the strongest possible commitment to quality and excellence.”

In an Oct. 18 telephone interview, Antonucci said the nonsense dies, which he prefers to refer to as “research dies,” bear a pool player on the concave obverse. The convex reverse on the research die depicts an 8-ball billiard ball. Stitching was placed around the circle of the 8-ball design on the research die reverse to simulate a baseball and provide Mint technicians information on die stress issues.

When the common obverse and reverse designs were selected for the coins, testing could continue using those designs.

The adopted common obverse, approved Sept. 9 and announced Oct. 15 for the gold $5 half eagle, silver dollar and copper-nickel clad half dollar, bears a baseball glove design.

The design was created by San Luis Obispo, Calif., artist Cassie McFarland, who will received $5,000 for winning the open design competition from which her design was selected.

The adopted common reverse, bearing a mandated rendition of a baseball similar to that used by Major League Baseball, is the work of U.S. Mint Sculptor-Engraver Donald Everhart II.

Antonucci said the research and development team at the Philadelphia Mint used standard flat planchets during testing after learning the Royal Australian Mint used flat, not preformed, blanks, for its domed coin program.

Mint officials also for a time used planchets in a composition not to be used for regular production.
While the research and development staff knew the baseball commems were to be struck in gold, silver and copper-nickel clad versions, “we had no idea of the level of complexities we would face and I didn’t want to waste gold and silver blanks on initial development,” Antonucci said.

“Accordingly, we investigated and found bronze blanks internally that would work for our early research,” Antonucci said.

Antonucci said “the gold version was a little more challenging.”

“We had no bronze blanks in a configuration suitable for the gold coin development, so we had to manufacture blanks from bar stock,” Antonucci said. The blanks were machined to the correct diameter using a CNC (computerized numerical control) lathe, he said.

The silver dollar denomination was used to establish the benchmarks because the coin has the largest diameter, at 1.5 inches, and the most metal to move to fill the coinage designs, Antonucci said.

The measurement parameters were established in consultation with the Monnaies de Paris and the Royal Australian Mint/Perth Mint, both of which have had previous experience with the production of curved coins, according to Antonucci.

The height of relief and dome for the gold coin reflects a 56 percent proportional scale of that established for the silver dollar, said Antonucci.

The half dollar presented the biggest challenge, Antonucci said.

During testing of the denomination, what the Mint described as a “flat coin” (which still had slight degrees of being concave on the obverse and convex on the reverse), the coin relief was shallow and did not resemble the relief attained on the other two denominations, Antonucci said. On this experimental “flat” half dollar, an 8 percent dome (shown in images on page 50) was used for initial testing, with no dome rising above the rim, Antonucci said.

The Mint’s testing for a concave/convex half dollar is entirely voluntary on its part. The authorizing legislation only required the silver and gold alloy coins to bear a concave obverse and a convex reverse, with the half dollar permitted to have its normal relief. However, Deputy U.S. Mint Director Richard A. Peterson eventually made the decision that the half dollar denomination would also be concave/convex so all three coins in the program would have a similar appearance.

After the decision was made to also dome the half dollar, the initial height of relief and dome for the half dollar was scaled to an 80 percent proportional scale relative to the silver dollar’s measurements, and tweaked to accommodate the stress being exerted on the coin dies, affecting die life.

Subsequent trial and error tweaks pushed die life from the low hundreds for the half dollar to 3,000 coins, or 6,000 strikes per pair of dies (the Uncirculated versions of the coins will be struck twice; the Proof versions will be struck three times). In contrast, for the half dollar dies domed at 80 percent of the dollar coin’s dome height, die life was below 100 coins, or 200 strikes per pair of dies, according to Antonucci.

“We went through several iterations, working up to about 500 coins per die,” Antonucci said. “After several height of relief modifications, we started to approach 1,000 coins per die. Our target was well over 2,000 coins per die. This was when we lowered the dome to half of what it was and saw an immediate major increase in die life.”

When the dome was modified to 80 percent proportional scale of the dome on the silver dollar, die life problems occurred, he said.

“The dome was summarily reduced, scaled to 50 percent of the previous dome height of the clad,” Antonucci said. “In order for the Mint to achieve its goal of more than 4,500 coins per die, Philadelphia Mint technical staff had to tweak the shoulder designs, which gradually pushed up the die life numbers.”

The commemorative coins are being struck on Grabener 360 coin presses with dies oriented to strike vertically.

For the regular production of the silver and gold versions of the Uncirculated coins, the concave glove obverse will serve as the hammer (or upper) die, and the convex baseball reverse will be the anvil (or bottom) die.

The die orientation is the opposite for the half dollar, with the upper, hammer die being the die for the convex ball design and the concave glove being struck by the the anvil or lower die.

The die orientation for the half dollar was flipped from that of the silver gold and gold $5 coin in order to provide better metal fill in the design and extend die life. Testing with the die orientation the same as that for the silver dollar and $5 gold coin resulted in insufficient die fill, lower life, and blanks sticking to the hammer die.

In addition to changing the die orientation, stitching on the baseball was rounded, to eliminate the sticking problem experienced.

Mint technicians briefly were preparing to use collars of a larger diameter than used for standard coins out of concern that the planchets would bend during striking with a resultant shrinkage in diameter, but that proved unnecessary. Standard collars are being used, Antonucci said.

A total re-engineering of the “slope” for the copper-nickel clad coin resulted in an optical curvature of the reverse of the half dollar design, to half of the 80 percent dome that was working badly, but the coin is still domed.

Planchets for the gold coins are being provided by Vennerbeck, Stern Leach in Rhode Island, and silver dollar planchets by Sunshine Minting in Idaho.

Copper-nickel clad coinage strip from which the U.S. Mint is blanking its own half dollar planchets is being provided by Olin Brass from Illinois and PMX Industries in Iowa.

Antonucci said his technical staff was surprised by the tonnage requirements necessary to fill the designs.
The necessary tonnage per strike is 30 percent less than what it would be for flat, rather than curved coins for all three denominations.

Mint technicians have reported problems with finning of the gold $5 coins, Antonucci said, creating a higher than usual, sharp rim.

Tweaking of the die neck-to-collar clearances will eliminate that high rim on production coins, he said.

Finning is the result of a slight misalignment of the obverse, reverse and collar dies. Even the slightest gap will allow metal to be pushed up into and beyond the gap.

Additional information on the development and production of the CNC research dies for the baseball coins, design reductions and master tooling, as well as various technical modifications to the approved designs will be incorporated into a separate follow-up article to be published in the Nov. 25 issue of Coin World.
The follow-up story will also chronicle and illustrate delamination problems encountered during the half dollar development. ¦