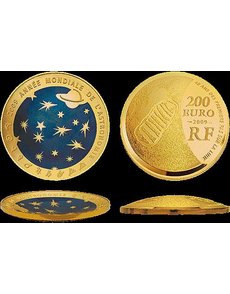 Technical requirements for the 2014 Baseball Hall of Fame gold $5 half eagle and silver dollar indicate their production should replicate the concave/convex look of the French 2009 International Year of Astronomy gold €200, shown, and silver €10. 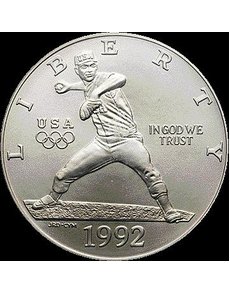 The sport of baseball was first recognized on a U.S. commemorative coin with the 1992 Olympic silver dollar. The design was selected through an open design competition.

The U.S. Mint on April 11 will launch an open, public design competition for the shared obverse to be used for three 2014 National Baseball Hall of Fame coins.

A congressionally led ceremony will be held April 11 in Washington, D.C., formally announcing the design competition. April 11 also begins the 30-day period during which the Mint will accept design submissions for the competition, according to Tom Jurkowsky, director of the U.S. Mint’s Office of Public Affairs.

The winning design will be used as the common obverse for the 2014 National Baseball Hall of Fame commemorative gold $5 half eagle, silver dollar and copper nickel clad half dollar.

The 10:30 a.m. Eastern Standard Time ceremony is scheduled for the U.S. Capitol Visitor Center, located beneath the East Front plaza of the U.S. Capitol at First Street and East Capitol Street. The event is expected to be hosted by Rep. Richard L. Hanna, R-N.Y., and Sen. Kirsten Gillibrand, D-N.Y.

Hanna and Gillibrand introduced the House and Senate legislation, respectively, that resulted in the National Baseball Hall of Fame Commemorative Coin Act, Public Law 112-152, signed into law by President Obama on Aug. 3, 2012. The hall is located in Cooperstown, N.Y.

The April 11 ceremony is to include representatives from the U.S. Mint, other members of Congress, officials of Major League Baseball and a number of former major leaguers who have been inducted as members of the National Baseball Hall of Fame.

Jurkowsky said March 19 that the Mint would be issuing a “teaser” notification March 28 to include some of the details for the April 11 announcement of the design competition.

The enabling coin act mandates a common reverse design that “shall depict a baseball similar to that used by Major League Baseball.”

Proposed reverse designs executed by members of the U.S. Mint’s engraving staff and private artists from the U.S. Mint Artistic Infusion Program were reviewed March 11 by the Citizens Coinage Advisory Committee and on March 21 by the Commission of Fine Arts.

The enabling act also mandates an open design competition from which a common obverse design will be given final approval by Treasury Secretary Jacob J. “Jack” Lew.

The competition will be open to the public, in addition to the Mint’s engraving staff and Artistic Infusion Program artists.

The common obverse is to be “emblematic of the game of baseball,” according to the act, but not represent any particular player or team, Jurkowsky said.

According to the enabling act, “The Secretary shall encourage 3-dimensional models to be submitted as part of the design proposals.”

It has not been announced yet whether the CCAC and CFA will review all proposed designs, or, depending on the number of submissions received, review a smaller number whittled down by an internal Mint review team.

Jurkowsky said designs may be submitted under two age level categories — those 13 and under, and those 14 and over. The design from which Lew or his designee will make the final selection for the common obverse will come from the 14 and over age group.

Compensation to the submitter of the winning design shall be not less than $5,000, according to the enabling act, taking into account the sale price of each coin.

Jurkowsky said the designer’s initials will not appear on the coin, only those of the member of the Mint’s engraving staff who will be presented with the task of sculpturing the design.

Without significantly adding to the purchase price of each coin, “the $1 coins and $5 coins minted under this Act should be produced in a fashion similar to the 2009 International Year of Astronomy coins issued by Monnaie de Paris, the French Mint, so that the reverse of the coin is convex to more closely resemble a baseball and the obverse concave, providing a more dramatic display of the obverse design chosen, ...” according to the enabling act.

The production technique was used for the French silver ?10 and gold ?200 coins, which feature a raised dome bearing the reverse design, with the concave side showing the obverse. When viewed edge on, the shape of the coin resembles that of a shallow bowl, with the reverse representing the exterior and bottom of the bowl.

Jurkowsky said the U.S. Mint has been conducting research and development at the Philadelphia Mint to accommodate the production specifications.

The copper-nickel clad half dollar will be produced the same way as previous commemorative half dollars.

The 2014 Baseball Hall of Fame coin program is not the first time the sport of baseball has been honored on a U.S. coin. Baseball was honored on the obverse of the 1992 Olympic silver dollar, whose design resulted from an open design competition.

Baseball was also commemorated on a 1995 Atlanta Centennial Olympics copper-nickel clad half dollar. ¦