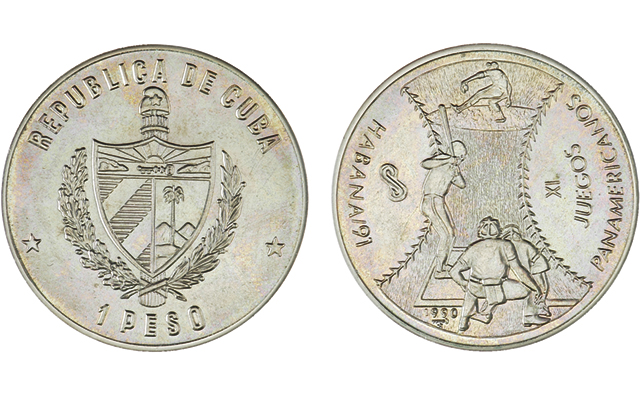 Cuba is among the powerhouses of international baseball competition, having dominated Olympic play from 1992 through 2008, before baseball was removed from the Games. Among several commemorative coins from Cuba highlighting that nation’s love affair with the diamond is the 1-peso coin from 1990, giving a unique perspective on the showdown between batter and pitcher.

Baseball’s popularity in Central and South America and the Caribbean is perhaps centered in Cuba, which has dominated international baseball play for decades.

The powerhouse Cuban national baseball team in April 2014 ranks third in the International Baseball Federation rankings (after being first since the rankings debuted in 2009), having dominated international competition, including winning 25 Baseball World Cups of the 38 held from 1938 through 2011.

Cuba has celebrated the island nation’s love for the game with the issuance of several collector coins, which are illegal to import for American collectors.

Thus, one of the ironies of the Communist-era Trading With the Enemy Act, enacted in 1963 when the American policy toward Communist Cuba was in its infancy, is that the law restricting import of such things as Cuban cigars also bans its coinage, which has so often featured America’s game.

But like the seemingly unending string of defectors from Cuba’s sports teams, Cuban commemorative coinage somehow makes its way to the United States (a new policy enacted by eBay in 2013 has at least stopped the coins from being sold on that platform).

Cuban coins honoring baseball include a trio celebrating the 1990 Pan American Games. An Uncirculated copper-nickel peso, Proof .999 fine silver 10-peso piece and a Proof .999 fine gold 50-peso coin were released by Cuba, all sharing a design emphasizing the duality of the game; in a unique perspective, the collector sees the one-on-one battle between the pitcher and batter, with the umpire and catcher in the scene to highlight the team aspect of the game.