Barber silver half dollar from Titanic passenger in auction 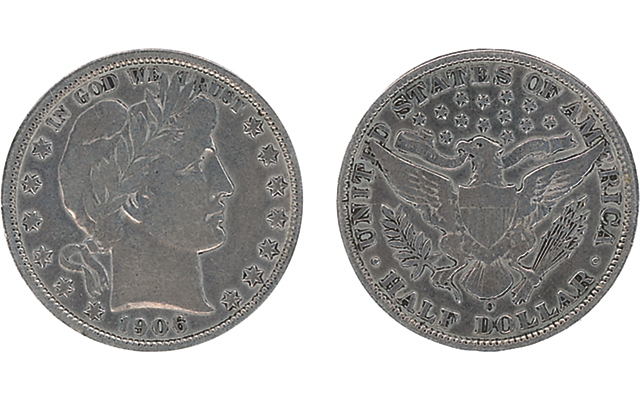 When Englishman John W. Gill was lost with the RMS Titanic on April 15, 1912, his death was a heartbreaking twist in a love story that continued even after he died.

The second-class passenger was traveling to America to create a new life and home for himself and his newlywed bride, Sarah, who had remained in England. When he died, the 24-year-old carried $43 in U.S. paper money and $4.60 in U.S. coins, as well as smaller amounts of British currency and his £13 ticket for fare.

A 1906-O Barber silver half dollar recovered from Gill's body will be featured in a Titanic-themed auction by RR Auction, closing April 24.

Gill’s body was recovered by the cable ship CS Mackay-Bennett in the aftermath of the sinking, and he was buried at sea. Numerous objects were recovered from his body and cataloged before being returned to his widow, including this silver coin, all of which were included in the inventory list prepared by the provincial coroner of Nova Scotia.

John Gill was supposed to have been accompanied by his wife and her father.They instead decided to stay behind and complete business before joining him in America later in 1912, according to the auction house.

No grade is identified for the coin, which has a starting bid of $500 but is expected to realize much more than that, based on previous sales of coins recovered from Titanic victims.

Other highlights in the sale include the original .925 fine silver “Loving Cup” presented to Capt. Arthur Rostron of the RMS Carpathia by Titanic survivor Margaret “Molly” Brown. Bidding is expected to exceed $200,000.

The full catalog of 225 lots is posted online at the firm’s website, www.rrauction.com.

Bidding opened April 17 and continues through April 24. Bids are being accepted via telephone, email and online.

A 22.5 percent buyer’s fee will be added to the hammer price on all individual lots, with a 2.5 percent discount for those paying by cash, check or wire.