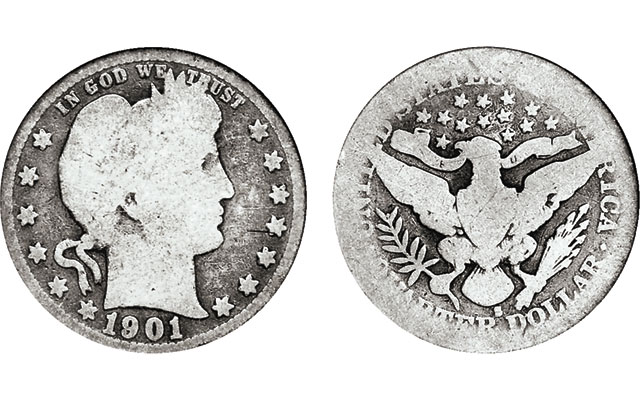 A well-worn 1901-S Barber quarter dollar, one of a very few 20th century coins valued into the thousands of dollars in About Good 3 and Good 4, is still in great demand.

I am putting the finishing touches on A Guide Book of Barber Silver Coins — silver dimes, quarter dollars, and half dollars — for Whitman Publishing LLC.

Minted from 1892 to 1915 or 1916, these coins were in strong demand almost continually. This demand was for use in commerce.

Few collectors saved them, except for yearly Proof coins, and the mintages for the Proofs were just in the hundreds. Such circulating issues as the 1896-O and 1904-S half dollars, mintages 924,000 and 553,038, are super rarities today in Mint State 65 and higher grades. Years may pass between auction offerings.

The design of the Barber coins was such that the relief details of the obverse in particular wore away quickly. To qualify as Fine 12 a coin needs to have all of the letters in the word LIBERTY readable. It seems that within just a few years in circulation, some of the letters were gone.

Collecting such coins did not become popular until the 1930s when Raymond “National” and Whitman albums and folders became very popular.

Today, if someone wanted to build a registry set of Barber halves in the MS-65 grade, it would take at least 10 years to do so, and even then some might be missing!

The wide circulation has resulted in nearly all Barber coins being rare in grades from Fine to About Uncirculated, in relation to the demand for them. Today, all Barber coins are readily collectible in Good 4 grade.

The situation is quite different from Seated Liberty coins, which preceded the Barber series, or the Winged Liberty Head dimes, Standing Liberty quarter dollars, and Walking Liberty half dollars, which came immediately afterward.

Annual membership dues in the Barber Coin Collectors’ Society are $15. If you are interested in joining, email David Earp at drpcoins@frontiernet.net.