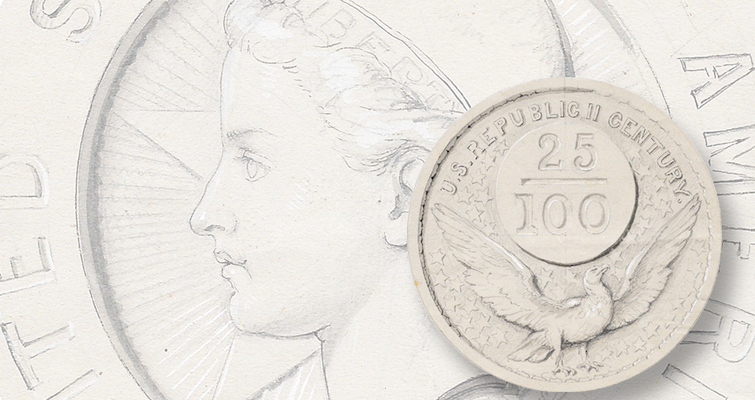 Pencil sketches for a circulating commemorative quarter dollar were executed in 1877 by William Barber. 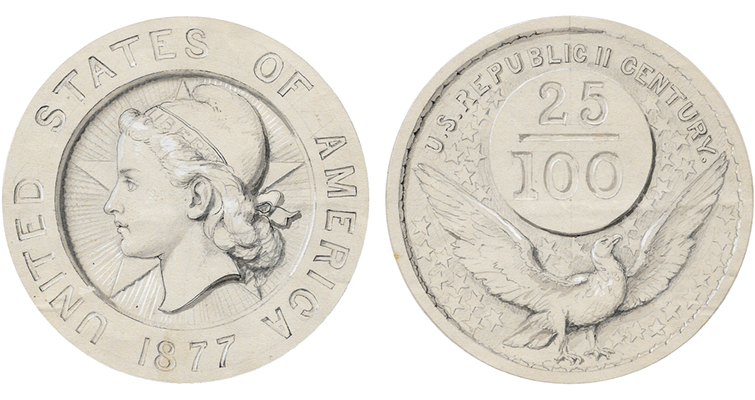 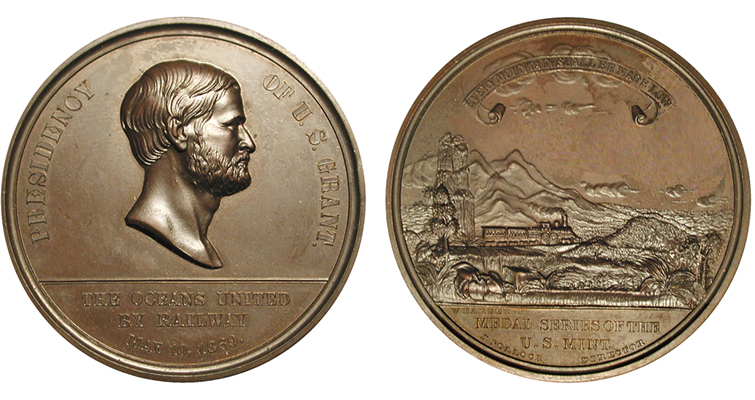 Charles and William Barber’s heirs have an example of the bronze medal the two engravers jointly executed in 1869 to celebrate the transcontinental railroad. 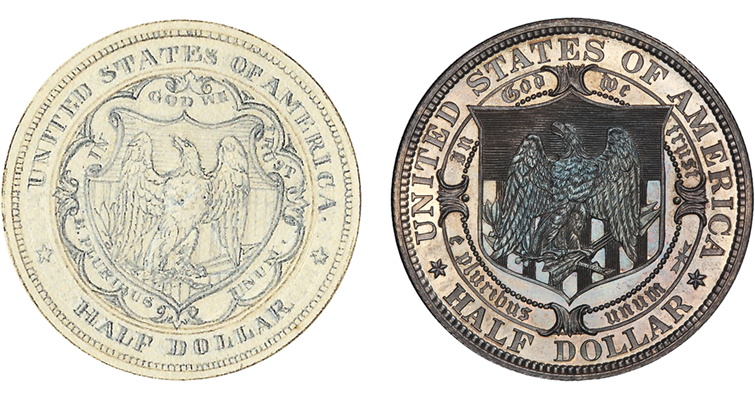 William Barber’s descendants have this sketch, above left, signed by William Barber, for a pattern half dollar; the finished reverse as struck is illustrated above right. 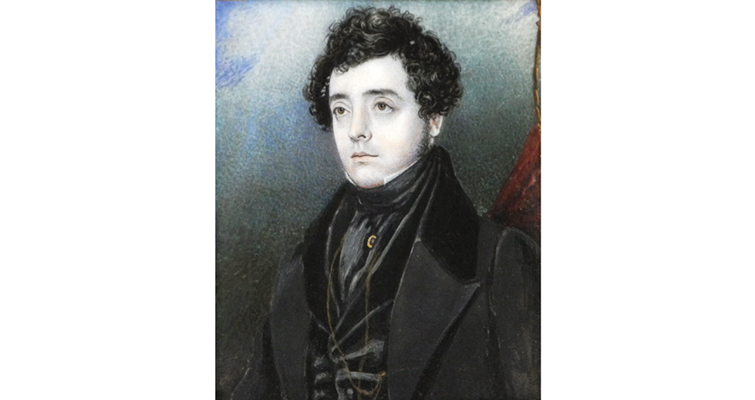 Color painting on ivory of a young William Barber likely dates from the 1840s, before he came to the United States in 1852. 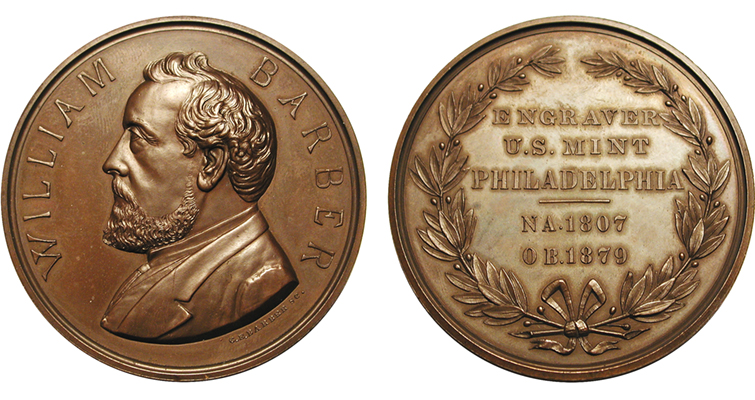 Until the discovery of the painting of William Barber as a young man, the only known visage of the fifth chief engraver was on an 1880 medal executed by his son, Charles. 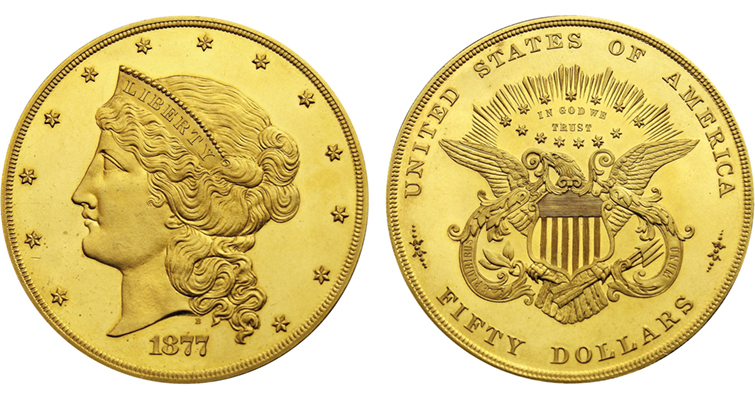 William Barber was a prolific producer of U.S. coin patterns, including the 1877 gold $50 half unions. The only two examples known are in the Smithsonian. Illustrated is one of the two. 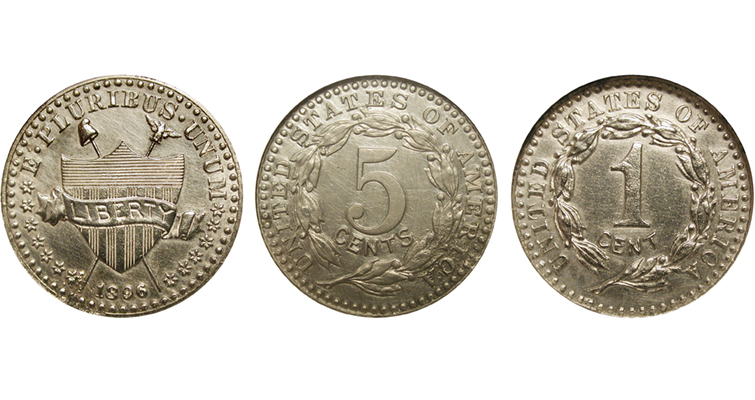 The Judd 1772 5-cent and Judd 1769 1-cent patterns by Charles E. Barber share the same Shield obverse. These patterns were struck in aluminum. 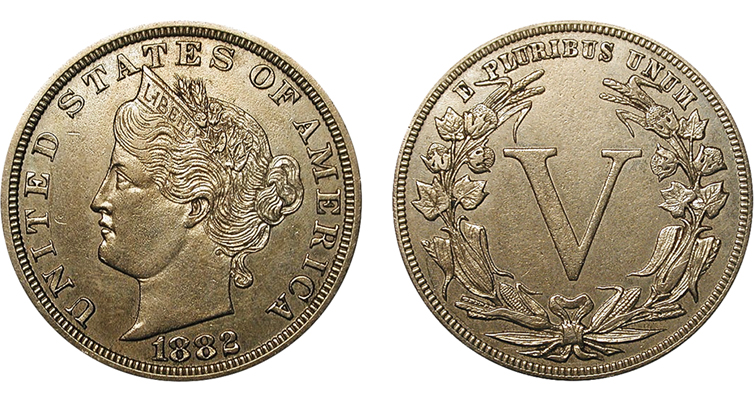 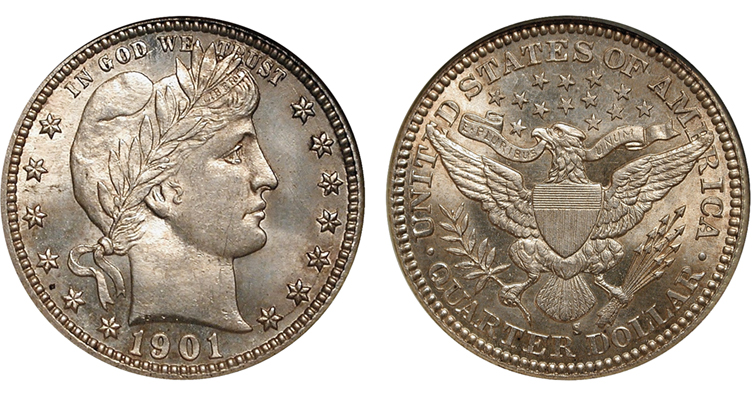 A pristine example of the 1901-S Barber quarter dollar for the series executed by Charles E. Barber is among Barber items included in exhibits at the ANA.. 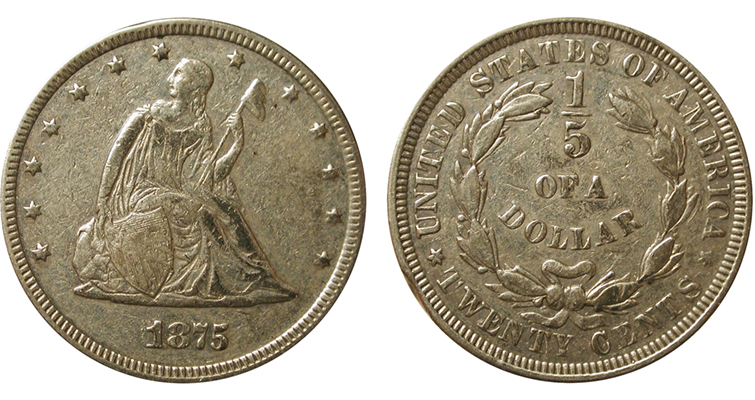 Well-circulated example of an 1875 20-cent pattern, Judd 1407, the work of William Barber is another exhibit item. 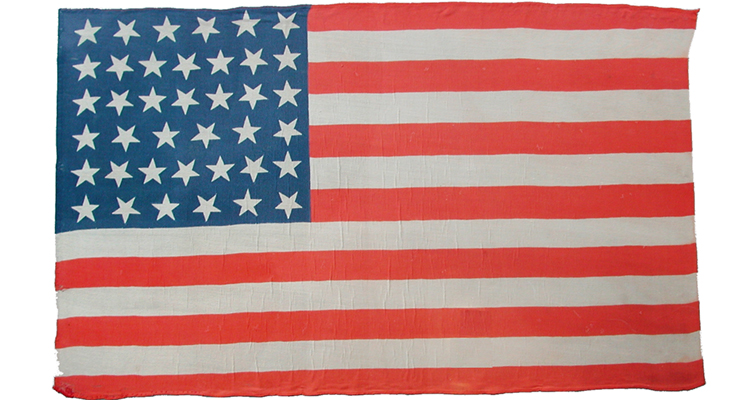 This 39-star American flag was carried in 1905 by Charles E. Barber on a tour of European mints. It was created before 1889, in anticipation of the Dakota Territory becoming the 39th state. Instead the territory split and entered the union the same day as the 39th and 40th states, North Dakota and South Dakota. 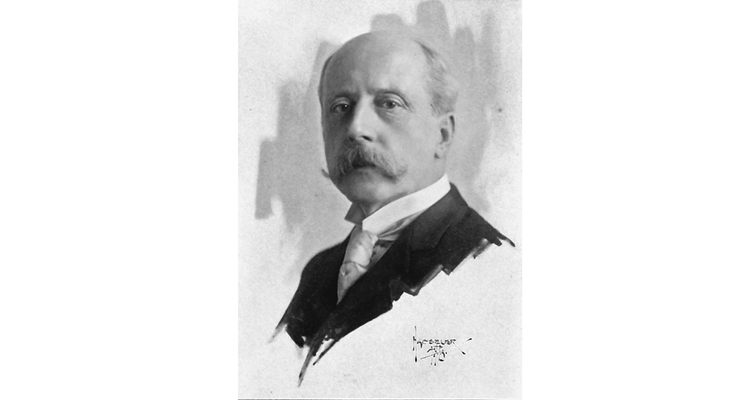 A chance email to the Barber Coin Collectors Society website from the wife of one of William and Charles E. Barber’s descendants propelled BCCS President John Frost on a five-month research odyssey deep into the lives of the respective fifth and sixth chief engravers of the United States.

Trips to Pennsylvania and Massachusetts brought interviews with the Trepagnier brothers, whose maternal grandmother was Charles E. Barber’s daughter, Edith.

The brothers are the great-great-grandsons of William Barber and great grandsons of Charles E. Barber.

William and Anna May Barber had at least three other children, a younger son named Harry, and two daughters, Florence and Mary, according to Frost’s research. The two daughters are buried with their parents in Philadelphia, Frost states.

Charles E. Barber had no sons, which is why the Barber surname for his descendants ends with him.

His wife Martha having died in 1899, Charles remarried, to Caroline Gaston, in 1902, Frost says.

Frost will deliver a Money Talks session at 4 p.m. Friday Aug. 17 in Room 121-B of the Pennsylvania Convention Center during the American Numismatic Association World’s Fair of Money in Philadelphia.

Among the historical items in the Trepagnier brothers’ inherited possession are examples of medals designed and engraved by both U.S. Mint artists, never-before-seen photographs, paintings, coin design sketches, and the daily journal that Edith Barber kept while accompanying her father and stepmother on their three-month European tour in 1905.

The diary sheds new light on Charles Barber and refutes some commonly held myths about him, such as his not getting along with his peers, most notably Assistant Engraver George T. Morgan, according to Frost.

Charles E. Barber is well known as the designer of the Barber dime, quarter dollar and half dollar, as well as the Liberty Head 5-cent coin, while William Barber is renowned for multiple medals and pattern coins, as well as the Seated Liberty 20-cent coin and Trade dollar.

The research odyssey is a dream come true for Frost, who not only is immersed in Barber coinage and serves as president of the specialty collectors group but also is director of numismatic education for the Liberty Seated Collectors Club and delivers education on both organizations whenever and wherever he can.

The conjoined bourse tables for both collectors groups will jointly feature a 12-case exhibit of materials the Barber descendants have graciously loaned for display Aug. 14 to 18 during the American Numismatic Association World’s Fair of Money at the Pennsylvania Convention Center.

William Barber created one of the most famous U.S. patterns, the 1877 gold $50 half union; the only two examples of the gold pattern are housed in the National Numismatic Collection in the Smithsonian Institution’s National Museum of American History.

Additionally, William was the designer for an 1876 Centennial medal and collaborated with son Charles on the 1879 Ulysses S. Grant presidential inaugural medal.

The dies for the Grant medal recognizing the 18th president’s second term were among William Barber’s last completed assignments before his death on Aug. 31, 1879.

Frost also discovered that William Barber executed the groundwork for what would have been the nation’s first circulating commemorative coin. Proposed obverse and reverse sketches for the coin were among the Trepagnier family’s Barber possessions that Frost studied.

The obverse design for the potential circulating commemorative quarter dollar, celebrating the nation’s entering its second century, features a bust left of Liberty wearing a Phrygian cap, superimposed over a five-pointed star and recessed as the central device schematic. Inscribed around a raised border is UNITED STATES OF AMERICA and the date, 1877.

The reverse design features U.S. REPUBLIC II CENTURY inscribed along the top border above the denomination rendered on a circular raised tablet as 25 over a fraction bar with 100 below. An eagle with its wings outstretched appears below with five-pointed stars scattered throughout the fields.

Also among the Barber descendants’ possessions is a design sketch signed by William Barber. The sketch is similar to the engraver’s reverse design on a half dollar pattern, Judd 1524 (as attributed in J. Hewitt Judd’s United States Pattern Coins). The signed sketch depicts an eagle within a shield, with arrows in its left talons and olive branch in its right. Inscribed around the main design are IN GOD WE TRUST and E PLURIBUS UNUM with UNITED STATES OF AMERICA and HALF DOLLAR inscribed around the border.

Frost says the only major visual differences between the signed pattern sketch and the struck pattern are in the shape of the shield and the lettering style in the inscriptions.

The family’s possessions also include a 39-star American flag presented in 1905 to Charles Barber by President Theodore Roosevelt, for Barber to carry on his European excursion on behalf of the Mint.

The flag was created in anticipation of the Dakota Territory becoming the 39th state, which did not happen in exactly the way expected.

Instead the territory was split into North Dakota and South Dakota, and both entered the Union on Nov. 2, 1889, as the 39th and 40th states, respectively. Frost believes the flag dates to circa 1889 and was likely acquired by Roosevelt around that time because he lived in present-day North Dakota during the 1880s.

That Roosevelt would have gifted to Charles Barber his prized flag demonstrates a personal relationship with the engraver that was much better than numismatic lore relates, Frost said.

The family also owns six previously unknown photos of Charles Barber and a painting on ivory of William Barber as a young man. There are no known photographs of William Barber, and up until the discovery of the painting, the only likeness of William Barber known to collectors was on a 51-millimeter bronze medal executed by Charles, following his father’s 1879 death.

The medal was issued in 1880, and bears William Barber’s birth and death years, 1807 and 1879, on the reverse. An example of the medal is in the possession of the family, as is a bronze 45-millimeter version of an 1869 medal, The Oceans United by Railway, executed by William Barber to commemorate completion of  the transcontinental railroad, with President Ulysses S. Grant’s portrait facing right on the obverse.

??Paintings of William Barber and wife, Anna May Barber.

??Scan of letter by William Barber about Carson City dies.

??Original memo by Mint officials upon the death of William Barber.

??Set of “double dimes,” or 20-cent coins, including one of William Barber’s patterns. 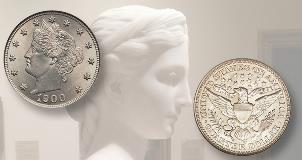 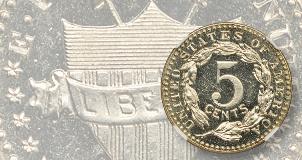 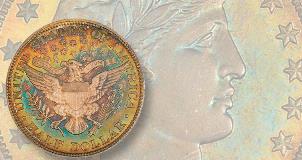