Bank of England approves use of polymer notes 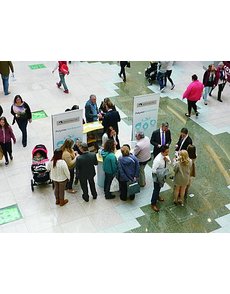 Bank of England employees holding concept images walk down the steps at the bank in advance of the Dec. 18 unveiling of new designs for the £5 note with Winston Churchill’s image and the £10 note with an image of Jane Austen. 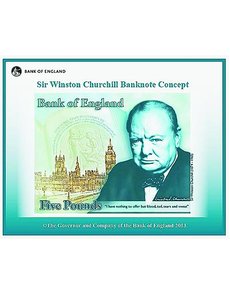 A portrait of Winston Churchill will be on the new £5 Bank of England polymer note to be issued in 2016. 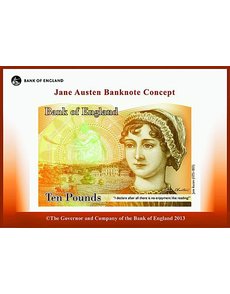 Portrait of British author Jane Austen on the back of the proposed design for the £10 note to be issued in polymer in 2017.

One of England’s great leaders will be called upon again to lead the nation, this time into the world of polymer bank notes, in 2016.

A portrait of Sir Winston Churchill, prime minister of England during World War II, will appear on the back of the first £5 polymer notes to be issued by the Bank of England.

The bank has identified three main benefits in the switch from paper notes to polymer: polymer is cleaner, more secure and more durable than the traditional paper used for bank notes, according to Bank of England Governor Mark Carney during a news conference held in London on Dec. 18.

Carney said the bank conducted a three-year review that included public forums all across the United Kingdom. Over 2,700 face-to-face interviews were conducted between September and November of 2013 to ask citizens what they thought of a switch to polymer. Prototype notes were offered to those interviewed so they could handle the notes and sample the feel.

Of those responding to interview questions, 87 percent were in favor of the switch, according to Carney. Objections were primarily based on the feel of the polymer surface, and the bank is researching the possibility of adding some texture to the surface of the notes, according to Victoria Cleland, head of the notes division for the bank.

In addition to Churchill’s portrait, the design of the new £5 polymer note will depict a view of the Palace of Westminster and the Elizabeth Tower from the south bank of the Thames River looking across Westminster Bridge. The Elizabeth clock tower is possibly better known by the name of its main bell, “Big Ben.”

According to the bank, the image of the Elizabeth Tower shows the hands of the Great Clock at 3 o’clock — the approximate time on May 13, 1940, when Sir Winston Churchill declared in a speech to the House of Commons: “I have nothing to offer but blood, toil, tears and sweat.” This text will be printed beneath the portrait.

In 2017, a portrait of Jane Austen will be used on the back of the polymer £10 note. The portrait on the note is taken from a painting commissioned by James Edward Austen, Jane Austen’s nephew, in 1870.

“Jane Austen certainly merits a place in the select group of historical figures to appear on our banknotes. Her novels have an enduring and universal appeal and she is recognized as one of the greatest writers in English literature. As Austen joins Adam Smith, Boulton and Watt, and in future, Churchill, our notes will celebrate a diverse range of individuals who have contributed in a wide range of fields,” Carney said.

Austen will be only the third woman — other than Queen Elizabeth II — to appear on British bank notes, following prison reformer Elizabeth Fry, who is being replaced by Winston Churchill on £5 notes in 2016, and nurse Florence Nightingale, seen on previous £10 notes.

The bank faced criticism after announcing in April 2013 that Winston Churchill’s portrait will be used on the new £5 note. That decision meant that, aside from Queen Elizabeth II, no woman would be depicted on any currently circulating British notes. Many female members of Parliament joined more than 30,000 people who signed an online petition demanding a woman be depicted on the £10 note. ¦