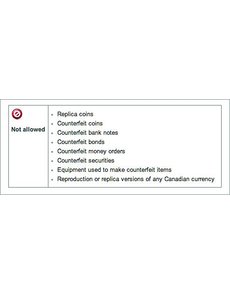 The new eBay policy on counterfeit and replica coins banned for sale on the online auction site is shown here in a screen capture from the Web page on which it appears.

The ban by eBay on sellers posting listings of coin replicas went into full effect Feb. 20, although some listings placed before that day remained open.

Listings posted as late as the evening of Feb. 19 will remain online at ebay.com until the terms of the listing expire, which is no longer than 30 days, Johnna Hoff, media spokesperson for eBay, said.

The number of replica coin listings as of the morning of Feb. 20 was slightly higher than three days earlier, as sellers apparently took advantage of the window to post listings before the ban went into effect.

Officials of eBay implemented the replica ban as a means of policing the proliferation of counterfeits from Chinese sources that have filled the replica listings of eBay for several years.

The ban includes pieces that are stamped with the word COPY that may or may not have met the criteria for replicas or reproductions under the U.S. Hobby Protection Act.

Rather than attempting to track and police individual sources for the targeted listings, eBay banned listings of replicas altogether.

For several days after the ban went into effect, an informational page at the eBay website incorrectly suggested that certain replicas could still be sold through the website, most notably pieces marked COPY.

The eBay policy Web pages printed Feb. 22 inaccurately indicated replica U.S. and foreign coins were permitted to be listed for sale as long as they conformed to the stipulation that they bear the word COPY as required by U.S. law. The listing was also required to illustrate sharp images of the exact piece offered, with the images showing the word COPY.

Hoff provided Coin World a computer screen capture at 11:46 a.m. Eastern Time Feb. 23 of the corrected eBay website page that carries details of the replica listing ban. That screen capture is illustrated with this article.

Replica paper money continues to be allowed to be listed for sale as long as it meets the criteria established in the guidelines that appear at the Web address in the preceding paragraph. ¦