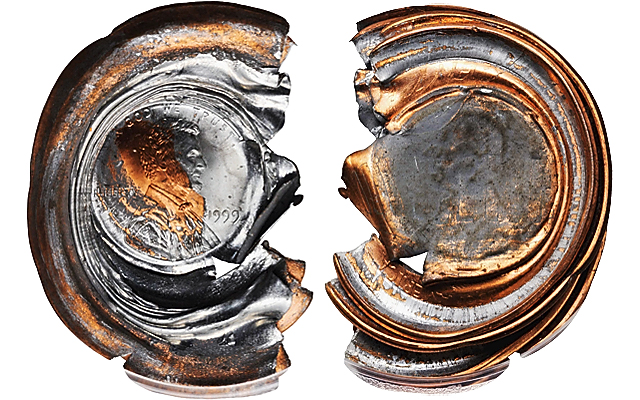 Among the most spectacular error coins are bonded clusters that contain multiple planchets fused together by the force of striking. This 1999 Lincoln cent bonded cluster in MS-64 red realized $2,702.50 at Stack’s Bowers’ June 27, 2014, auction.

The story: Among errors, few are more dramatic than multicoin bonded clusters where multiple strikings fuse planchets together resulting in a massive single object.

In this spectacular error, more silver-colored zinc is visible than rich copper, and the center strike is boldly impressed on the obverse. The different colors are the result of a switch in 1982 for Lincoln cents, from a copper-based composition to a composition having a core of 99.2 percent zinc, 0.8 percent copper and a plating of pure copper.

The reverse design is only lightly impressed, with lettering seen on the peripheries, as the central part of the piece was flattened due to the multiple strikings and the flow of the metal outwards.

Most bonded planchet errors are generally caught by the Mint and destroyed, so one that is this substantial is unusual in the marketplace. As Stack’s Bowers notes, examples like this one “capture the force of the strike and coining process when things go slightly wrong.”

In terms of valuation, errors of this type that can fit into standard sized slabs are often easier for dealers to market than pieces that won’t fit into slab. PCGS has graded this one MS-64 red, and the weight of 156 grains noted on the slab converts to 10.11 grams. Since a normal 1999 copper-plated zinc cent weighs 2.5 grams, one can deduce that the cluster has four or five coins. It sold for $2,702.50.