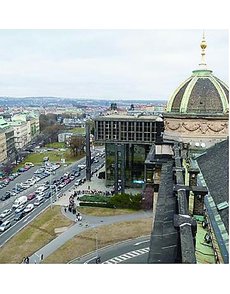 From the rooftop of the National Museum of Prague in the Czech republic, one can see below the long line of visitors waiting March 14 to see the traveling exhibit featuring one of two 1933 Saint-Gaudens double eagles from the National Numismatic Collection at the Smithsonian Institution. 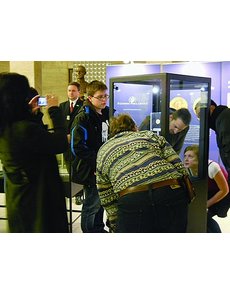 Above, at 10 p.m. on March 14, the National Museum of Prague in the Czech republic gallery was still full of visitors who took advantage of the extended museum hours to see the single coin exhibit.

The 2012 European tour of a 1933 Saint-Gaudens gold double eagle has netted the Netherlands numismatic firm that co-sponsored the tour a communications award.

The Samlerhuset Group has been named the winner of a bronze Stevie Award in the Communications or PR Campaign/Program of the Year — Reputation/Brand Management category in the 9th Annual International Business Awards.

The award, to be formally presented at a gala Oct. 15 in Seoul, South Korea, recognizes Samlerhuset for its promotional campaign in early 2012 supporting a seven-nation European tour of one of two 1933 Saint-Gaudens gold $20 double eagles from the National Numismatic Collection at the Smithsonian Institution’s Museum of American History.

The award is nicknamed a “Stevie” for the Greek word for “crowned.”

Samlerhuset Group B.V. (online at www.samlerhuset.com) — a global numismatic marketing firm headquartered in Almere, Netherlands, selling coins, commemorative pieces and related collectibles — underwrote all of the costs associated with the exhibit and tour, including those of Karen Lee, a curator with the Smithsonian’s National Numismatic Collection, who accompanied the coin to each stop, along with an armed security detail.

“The tour generated an unprecedented amount of media coverage in seven European countries and the U.S., excited many thousands to go see this fabulous U.S. national treasure and demonstrated how innovative international partnerships between corporate and cultural sectors bring value to the world,” Lee said earlier this year.

The chief executive officer of Samlerhuset B.V., Peter Swanston, said the 1933 double eagle tour “was a unique event organised for a unique coin.”

“Throughout Europe, those who knew about it before were amazed to see it,” Swanston said. “Those who learned about it for the first time were even more impressed. We are proud to have that achievement recognized with a Stevie Award.” ¦