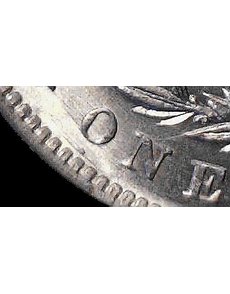 A raised lump and evidence of tooling appear below the O in ONE. 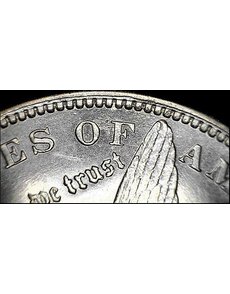 Raised lumps and tool marks are evident between the O and the F in OF. 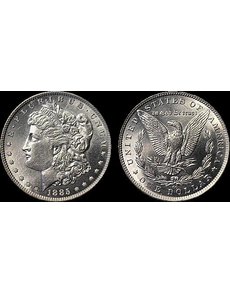 Images by Raymond Bruels III, courtesy of ANACS.The author believes this fake 1885-CC Morgan dollar was produced from a set of fake transfer dies, using a Philadelphia Mint 1885 Morgan dollar with an added CC Mint mark as the model coin.

This month’s counterfeit coin is becoming a bit of a celebrity. It was previously described by my friends at Numismatic Guaranty Corp. on the firm’s website, where it appeared inside a General Services Administration holder.

Since then, two separate examples have been submitted to ANACS, and I have heard that many other examples are floating around the numismatic marketplace.

Since a typical Uncirculated 1885-CC Morgan dollar is valued at $600 to $800, the average collector cannot afford to make this type of mistake.

While it has a good overall appearance, this fake has several obvious diagnostics:

? It has a raised die gouge from the hair above the 5 in the date.

? Raised lumps and tool marks are evident between the O and the F in OF. A raised lump and evidence of tooling appear below the O in ONE.

Based on the surface texture and overall look of this counterfeit, my best guess is that a set of fake transfer dies was produced, using a Philadelphia Mint 1885 dollar with an added CC as the model.

All this shows a high level of sophistication by the counterfeiters, but then they made some amateur mistakes that make this fake easy to detect.

Most of the diagnostics listed above involve tooling, where the counterfeit die maker uses a sharp tool to correct defects on the die.

Unfortunately for them, tool marks are usually easier to spot than the defects they intend to fix.

To make matters worse, they used an incorrect edge collar, resulting in these fakes having very sharp, finely spaced reeding that is noticeably different than the reeding on a genuine coin.

Take a good look at any 1885-CC Morgan dollar you encounter, checking for the above diagnostics.

With any luck, we can run this fake out of the marketplace before it has the chance to do serious damage.