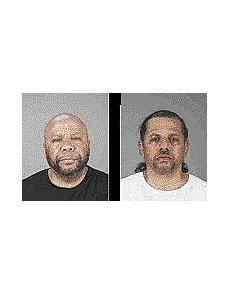 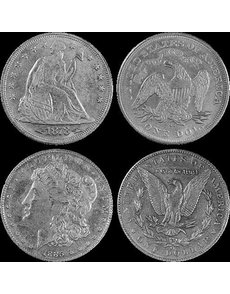 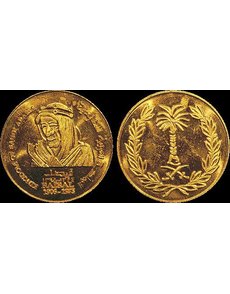 Although the designs depicted on what resembles a Kingdom of Saudi Arabia gold medal issued in 1975 as a memorial to the late King Faisal seem to match those of a genuine piece, the counterfeit piece illustrated does not bear the proper markings on the reverse indicating the gold purity as 22 karats. The purity stamp on a genuine piece should appear on reverse, along the bottom border at the 7 o’clock position.

The U.S. Secret Service’s continuing multi-jurisdictional investigation into the sale of counterfeit United States coins is widening, with incidents reported by local law enforcement agencies in at least 12 states.

In one of the most recent incidents, in Amherst, N.Y., a suburb of Buffalo, one of two men arrested and charged March 27 with allegedly peddling counterfeit Seated Liberty, Morgan and Peace dollars at a local jewelry store had been released from federal custody in New Jersey in 2011 on charges from four different states for allegedly doing the same thing.

Kim Baglio, a special agent for the Secret Service in Buffalo and the lead investigator in that office for probes into the counterfeit coin sales, confirmed April 2 the agency is working with local law enforcement on a number of cases. She said she could not disclose how many different incidents or New York jurisdictions are involved.

Mottola said efforts are also being coordinated within the Secret Service.

His co-defendant in the latest case, Thomas Hill, 54, of Orange, N.J., was charged with criminal possession of forged instruments, Leising said.

Jenkins and Hill were both returned to the Erie County Holding Center in Buffalo after their charges were bound over for grand jury action following an April 3 appearance before Amherst Town Court Justice Mark Farrell.

The owner of the Amherst jewelry store at which Jenkins and Hill both allegedly attempted to sell counterfeit Seated Liberty, Morgan and Peace dollars for $10 each at around 1:30 p.m. March 27, turned down their offer, Leising said. As Jenkins and Hill drove away, the jewelry store owner took down the license plate number of the rental car in which they were riding and alerted authorities, Leising said.

Jenkins and Hill were arrested a short time later. A search of their rented 2012 Cadillac SRX revealed more than 200 counterfeit silver dollars, many of them bearing the CC Mint mark for the Carson City Mint. Also found in the vehicle were counterfeit gold jewelry and 100 counterfeit gold Kingdom of Saudi Arabia commemorative medals. Genuine Saudi medals in 22-karat gold were issued in 1975 as a memorial to the late King Faisal. The genuine medals are stamped in the field on the reverse attesting to the purity of gold in each medal. The medals seized in the possession of Jenkins and Hill do not bear the stamp.

Leising said investigators are finding that those involved in the sale of the counterfeit U.S. coins are mostly traveling using rental cars. They use Global Positioning System and smart phone navigation to search jewelry and pawn stores in an area. They seem to target smaller, less knowledgeable businesses where the employees likely will not test the authenticity of the metal or authenticity of the coins before purchasing the counterfeit items, Leising said.

“Upon initial contact with the intended jeweler or merchant to be scammed, the suspect presents a real coin for initial inspection,” Leising said. “Then when it appears a sale is likely to be made, the suspect on several occasions pulled out a binder with around 200 additional counterfeit silver dollars.

“With incidents involving gold jewelry or scrap, the suspect presents the items as being 24K items, but [pieces] actually are in part lesser pure gold, like 14K or less, and some of the items may not even be gold at all.

“The suspects appear to be looking for merchants who will not know, or have the ability to properly test the metals the suspects are trying to sell.”

Coin World reported in its Aug. 22, 2011, issue that Jenkins was arrested July 21, 2011, in the attic of a North Brunswick Township, N.J., structure under outstanding warrants served by the New York/New Jersey Fugitive Task Force. The task force comprises investigators from federal, state and local law enforcement.

Jenkins, who authorities indicate has an extensive criminal record, had warrants for his arrest from police in North Brunswick Township, N.J.; Fredericksburg, Va.; Annapolis, Md.; and Fort Myers, Fla. The New Jersey warrant had a $50,000 bond requirement, while the other three warrants contained no-bail provisions.

Despite the no-bail provisions, Jenkins was released on $50,000 bond in early August, according to a spokesman for the Middlesex County Jail in North Brunswick Township, N.J. The spokesman said Jenkins has kept court appearances in New Jersey, Maryland, and Florida, as well as an undisclosed jurisdiction in Ohio.

A Pennsylvania man, Daniel Figueroa, 39, who was arrested in New Jersey subsequent to Jenkins’ detainment, also posted bond on charges of theft by deception and conspiracy. It was not learned in how many incidents and jurisdictions Figueroa is alleged to be involved.

Investigations are also being conducted by local and federal law enforcement in Massachusetts, New Hampshire and Connecticut that may or may not involve Jenkins. ¦