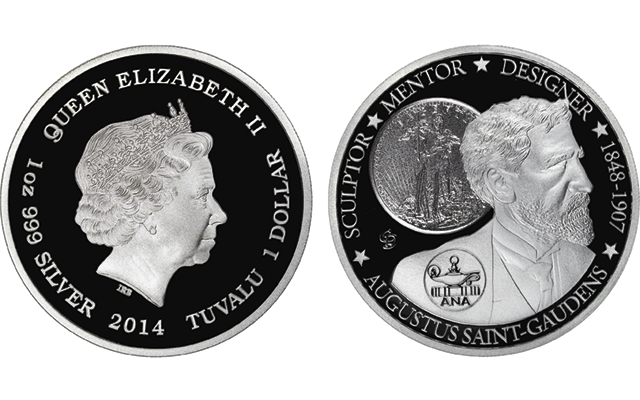 America’s most famous coin designer, Augustus Saint-Gaudens, is being honored on a Proof silver $1 from Tuvalu being launched at a coin show near Chicago Aug. 5 to 10. 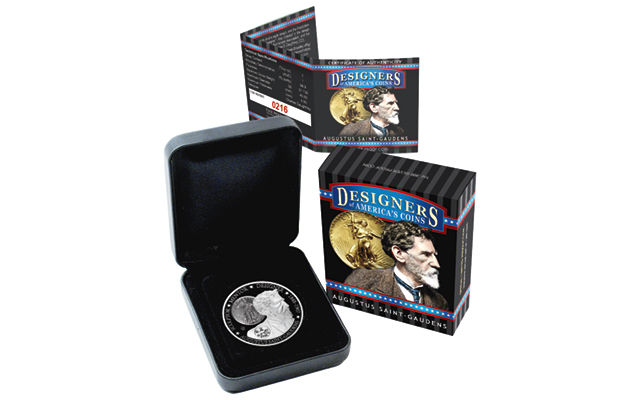 The Augustus Saint-Gaudens Tuvalu silver $1 and its packaging highlights the legacy of the famed designer. 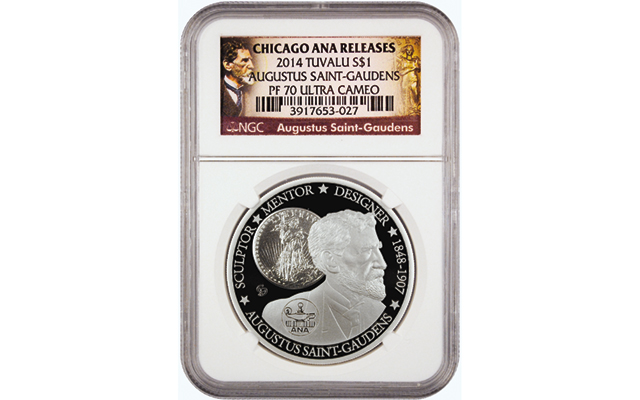 Examples of the Augustus Saint-Gaudens coin are available graded and encapsulated by Numismatic Guaranty Corp., like this Proof-70 Ultra Cameo example shown here. 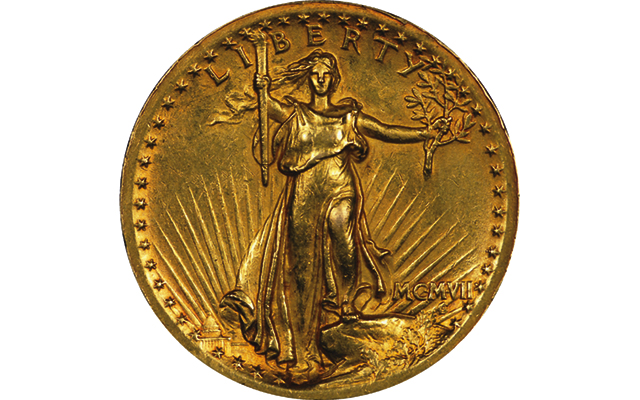 Designer Charles Daughtrey used this 1907 Ultra High Relief gold $20 double eagle as the basis for the coin shown on the new Tuvalu silver $1.

American artist Augustus Saint-Gaudens is famous for his coin designs in gold, but now one of those designs is making news in silver.

Modern Coin Mart said July 23 that it will issue a Tuvalu silver dollar showing the designer and his most famous work, at the American Numismatic Association World’s Fair of Money Aug. 5 to 9 in Rosemont, Ill.

According to MCM’s Charles Daughtrey (who designed the reverse of the coin and coordinated the release), though Saint-Gaudens has appeared on stamps and medals, this marks his first appearance on an official coin.

Daughtrey said that the coin results from a desire to have a coin program celebrating the coins that people collect and the artists that designed them.

According to MCM, this is the first issue in the Designers of America’s Coins series, with plans for future issues under way.

Daughtrey said, “We are working in tandem with the ANA to bring this coin to life, and what could be better than commemorating our nation’s coins and their designers on coins and unveiling them at the nation’s premier coin convention.”

The reverse of the coin shows the obverse of Saint-Gaudens’ most famous work, the 1907 High Relief, Roman Numerals gold $20 double eagle, with a profile of the artist himself.

The coin appears behind Saint-Gaudens’ head in a “glass bead” semi-frosted finish to contrast with the heavy frost on the effigy, according to Daughtrey. The ANA’s “Lamp of Knowledge” logo appears on the right shoulder of Saint-Gaudens.

A certificate accompanies each coin, and all but one of the certificates were hand-signed by Daughtrey (in a process that took nine hours, he said, also noting that he did not sign the certificate for his own example of the coin, serial No. 1).

Each coin weighs 31.1 grams and measures 40.6 millimeters in diameter.

Collectors can purchase either an example in original packaging or an example graded and encapsulated by Numismatic Guaranty Corp., and featuring a special label designed by Daughtrey. The signed certificate is included with either option.

An example in original packaging is offered for $119, the same price as for a Proof 69 Ultra Cameo example from NGC.

Special pricing is available to those who purchase the coin at the show. ANA show attendees can save $20 off the price of the first coin purchased, per option.

Daughtrey will be at the company’s booth at the show on Aug. 8 and part of Aug. 9, to meet collectors.

Any coins remaining after the show will be sold through the MCM website, www.moderncoinmart.com. Collectors can sign up through the website to receive notice of when coins go on sale, but signing up does not guarantee being able to purchase a coin.