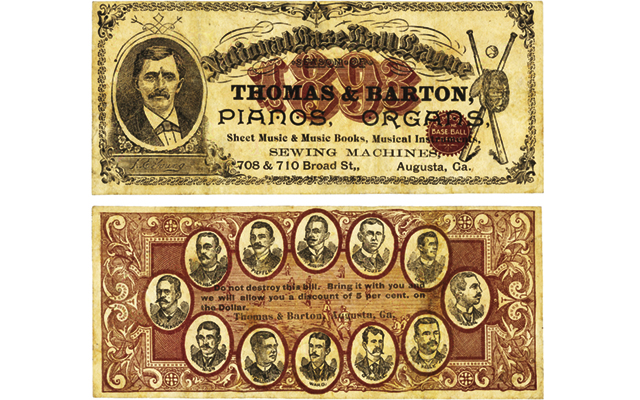 A portrait of N.E. Young at the left side of the face of this advertising note is combined with a vignette depicting two baseball bats, a ball and a catcher’s mask. A musical instrument and sewing machine store in Augusta, Ga., issued the good-for note. Members of the 1893 Boston Beaneaters baseball team are depicted on the back. The note, graded Apparent Very Fine 25 by PCGS Currency, sold for $1,150 in a 2011 Heritage auction.

Baseball-related paper collectibles pay tribute to the game with their designs.

Advertising notes were often issued by businesses, and most were “good fors” offering customers a discount as an incentive to buy. Throughout the late 1880s and 1890s, a number of businesses took advantage of the popularity of baseball to attract customers.

One such note was issued by the Thomas & Barton furniture store in Augusta, Ga. The store offered musical instruments, sheet music and sewing machines.

On the left side of the face of the note is a portrait of N.E. Young, possibly the manager of the store. A vignette of two baseball bats, a ball and a catcher’s mask appears at the opposite end of the face side. Portraits of members of the 1893 Boston Beaneaters baseball team are depicted on the back. Decades later, in the 1960s, the connection between Georgia and professional baseball became official when the descendants of the Beaneaters became the Atlanta Braves.

Players like Monte Ward, Jim “Orator” O’Rourke and Mike “King” Kelly, once household names, are a few of the team members pictured surrounding the 5-cent discount promised the holder of this ad note.