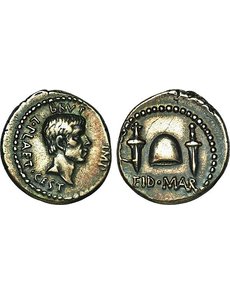 A legendary Marcus Junius Brutus Ides of March silver denarius sold for $546,250 during Heritage’s Long Beach Expo auction, one of many coins in a sale with a sell-through rate of 97.74 percent by value.

The rare coin market continues to expand globally, while closer to home the fall coin show season is in full swing.

Just a few weeks later is the inaugural American Numismatic Association fall National Money Show, set in Pittsburgh Oct. 13 to 15. The coin market then gets a much-needed breather until the Whitman Baltimore Expo, Nov. 17 to 20.

It’s been a huge few weeks for coin auctions with more than $115 million being sold at auction in the past six weeks, including $71 million sold at the summer ANA auctions in August, $34 million at the Heritage Long Beach auctions, nearly $6 million at Larry and Ira Goldberg Auctions pre-Long Beach sales and $4.5 million at the Stack’s Bowers Galleries Whitman Philadelphia auctions.

The Stack’s Bowers auction saw strong prices for numerous early American pieces that saw bidding that went beyond the realm of the specialists, including a rare 1781 Nathanael Greene at Eutaw Springs medal with documents from the Continental Congress on its presentation that sold for $86,250. Its strong price again confirmed the importance of provenance to today’s collectors.

Also noteworthy, the Heritage world and ancient coin auctions at Long Beach realized $20.4 million, showing the increasing globalization of the rare coin market and the ability of U.S. based coin firms to reach beyond U.S. coins to expand their bidder pool.

Equally impressive is that Heritage noted a 97.74 percent sell-through rate by value — meaning that the top lots found buyers.

Among the rarities changing hands was a legendary Marcus Junius Brutus Ides of March silver denarius, which sold for $546,250. It is undoubtedly among the most famous ancient coins, with a recognizable design that transcends the rare coin market.

As bidders continue to compete for a finite number of rarities, the most logical way for the coin market to expand and for prices to increase is by enlarging the pool of bidders. The global expansion of the coin market will hopefully bring more deep-pocketed international buyers into the U.S. coin market. ¦