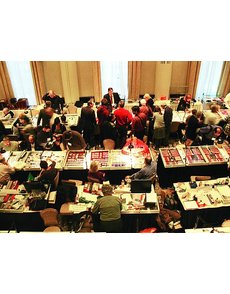 “Broken record” might be the most appropriate phrase when describing the 40th annual New York International Numismatic Convention because, as in recent years, emphasis repeatedly centered on the abundance of auctions held in conjunction with the show.

Multiple broken records established during those auctions are also a large part of the storyline.

Attendance, auction results and anecdotal evidence all suggest that the 40th annual show, held Jan. 6 to 8 in New York City, reflects a splintered world coin market. Though attendance was down, those who were there (and many who were not, but had access to auctions via technology) were buying in abundance.

Auction houses recorded an estimated $63,875,878 in sales of world coins, medals and paper money in 16 sessions of 12 auctions conducted by 12 firms (including one post-show session and a concurrent but unaffiliated auction by Bonhams).

The official auctions were conducted from Jan. 2 through 9.

The total realizations from NYINC auctions jumped at least 50 percent from the previous record of an estimated $41 million that was established during the 2011 show.

How high was the interest in auctions at the show? Several firms’ auctions continued into the next day, the most prominent being the record-setting Prospero Collection auction. That marathon auction began at 7 p.m. Jan. 4 but, according to various reports, did not end until sometime around 4 a.m. Jan. 5, thanks to hyper bidding that sent records crashing.

In addition, the Stack’s Bowers and Ponterio world coin sessions stretched into the wee hours of the morning.

Public attendance for the show, held at the historic Waldorf-Astoria Hotel, dipped from 1,812 people in 2011 to 1,636 in 2012, according to bourse chairman Kevin Foley.

The number of professional preview attendees — those willing to pay $100 to start buying and selling before the show opened to the public on Friday, Jan. 6 at 10 a.m. — rose to 185 from 170 last year.

While both attendance numbers are greater than those of 2011, they are still below the numbers registered for the record-breaking 2008 show, when public attendance was 2,011 and professional preview registrants numbered 201.

Among the auctions conducted at the convention was the Prospero Collection, which was auctioned by the New York Sale entity, consisting of Baldwin’s, Dmitry Markov and M&M Numismatics.

In addition, according to firm officials, the auction is believed to have established a record price for an ancient coin collection.

The record-setting gold coin distinction is held by the unique circa 350 to 300 B.C. gold stater of Pantikapaion, a city on the Black Sea in ancient Greece, that sold for $3.8 million, also establishing the new record price for an ancient Greek coin (Coin World, Jan. 23 issue).

A silver tetradrachm of Naxos, Sicily in ancient Greece believed to have been engraved by the “Aitna Master” realized $994,500 including the 17 percent buyer’s fee, the record for a silver Greek coin.

Coins seized in one auction

Despite the multiple records, one coin that did not establish a record was the focus of much attention during the show, the result of actions occurring Jan. 3, before the show opened.

News of the seizure of two coins from Sicily in ancient Greece, including a 409 to 406 B.C. silver decadrachm of Akragas that was expected to establish a new record price for an ancient Greek coin (Coin World, Jan. 23 issue), rippled through the bourse floor, but did not seem to affect bidding on the many other coins from Sicily, including several pieces in the Prospero Collection and others scattered throughout the firm’s other offerings.

Without the marquee lot, the lead lot in the “Cabinet W” collection was a unique silver tetradrachm of the tyrant Gelon. The coin features what Classical Numismatic Group and Nomos AG (which jointly conducted the auction) call “very probably the finest facing head ever to appear on Greek coinage.”

The circa 485 B.C. silver coin was issued in Syracuse in Sicily, part of ancient Greece, and bears a striking portrait of the river god Alpheios on the obverse.

The coin was reportedly discovered in dealer stock in Europe, uncleaned and thickly encrusted, before ancient coins dealer Sylvia Hurter picked it out and sold it in 2000 to an American collector. The American collector “had it very professionally and very carefully cleaned: this is the result,” according to the auction catalog.

The reverse of the coin is “marginally triple struck,” but otherwise the coin is in Extremely Fine condition. It realized $826,000, including the 18 percent buyer’s fee.

Estimates, admittedly nebulous on some occasions, missed the mark on two prominent counts.

One such estimate was for a silver drachm from Pharsalos, struck during the last quarter of the fifth century B.C., that realized $106,200 Jan. 3 in Classical Numismatic Group’s auction of the BCD Collection of Coins of Thessaly. The Pharsalos coin is in Near Extremely Fine condition and had an estimate of just $750.

The firm has not provided a total of prices realized for the portion containing the BCD Collection, but otherwise the Triton XV sale realized $8,681,189, including an 18 percent buyer’s fee; counting the Cabinet W collection, the firm realized $13,672,589 for all of its auctions.

The other estimate that missed the mark was for New York Sale’s Jan. 5 auction, which offered a circa 68 to 69 gold aureus of Roman emperor Galba in Extremely Fine condition that realized $432,900 (including 17 percent buyer’s fee), against a pre-sale estimate of $60,000.