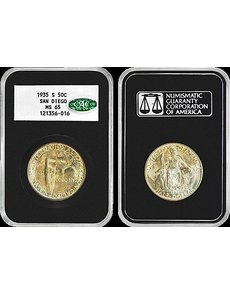 In a March 17 auction by GreatCollections, 11 bidders chased a 1935-S California Pacific Expo half dollar in a vintage, highly sought Numismatic Guaranty Corp. black holder and graded Mint State 65 with a Certified Acceptance Corp. sticker. It realized $4,000. For comparison, a comparably graded Professional Coin Grading Service MS-65 coin with CAC sticker realized $129.25 at a Heritage auction the same day, and MS-66 examples typically sell at the $180 level at auction.

Online auction site eBay continues to be a place where discoveries are made and sold.

On March 9, a seller offered an uncertified 1785 Connecticut copper with the African Head portrait, “from a very old collection” and of “presentable grade and appearance. Reverse nearly VF, typical minor surface and planchet irregularity.” After starting at 99 cents, 15 bids brought the total to $8,900.

Some dealers are electing to sell pricey coins uncertified on eBay.

That the seller offered an unconditional 14-day return policy likely added to bidder confidence. The firm confirmed on March 19 that the bids were valid and the coins not returned by their new owners.

Coins from the legendary Redfield hoard continue to attract buyers. In a Jan. 20 eBay auction, an 1895-S Morgan dollar in a red Paramount International Coin Corp. holder with a stated grade of MS-65, but described by the seller as merely “genuine, uncleaned, Uncirculated and a true Redfield,” realized $8,735. Large, high-quality pictures of the coin allowed bidders to make their own grade assessments and the dollar realized more than many MS-64 examples bring. ¦