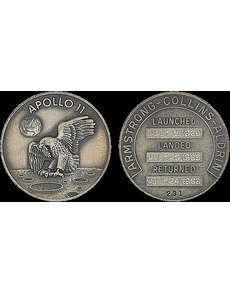 Scott was not part of the crew on the famed Apollo 11 mission, but as an astronaut he was able to order a medal to be sent into space. His medal, serial No. 231, is offered in RR Auctions’ Space and Aviation auction closing Nov. 29. 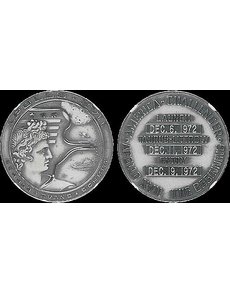 Beginning with the Apollo 17 mission, medals that were space-flown received the “F” prefix to their serial number, as seen here on Scott’s medal, F15, the number referring to his turn as commander of the Apollo 15 mission. Grading capsule prongs obscure part of the medal in the images. 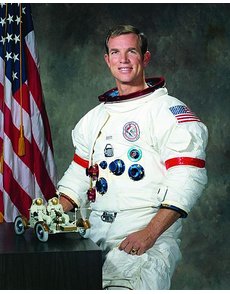 Most of the medals in the auction have made the nearly half-million-mile round trip from the Earth to the Moon and back. The medals are the numismatic highlights of the auction, and include an very rare Apollo 17 medal, an Apollo 11 medal and a medal marking the Apollo 15 mission commanded by Scott.

Scott had three flights into space, the last of which was the Apollo 15 mission, which provided the first extended scientific exploration of the moon.

The medals in the sale are from a series known to collectors as Robbins medallions.

Beginning with the first manned Apollo flight, Apollo 7, mission crew members contracted with the Robbins Co. of Attleboro, Mass., to create a series of gold and silver medals. The Robbins medals were ordered and paid for by NASA crew and staff, who were allowed to buy medals for any mission, regardless of their participation in the mission. A small number of each Robbins medal was placed aboard the Apollo spacecraft during a mission; the number flown aboard the spacecraft for any mission was limited.

Apollo missions carried between three and seven 14-karat gold medals per flight, and anywhere from 80 to 450 silver medals were “space flown” per mission, according to Howard Weinberger, author of two books on the Robbins medallions.

The silver medals remained in astronauts’ personal preference kits in the command module during the flights. However, on the lunar landing missions, the gold medals were taken to the lunar surface, according to Weinberger.

Still, with a celestial history, the silver medals are very popular, with those from the famed Apollo 11 mission and the final Apollo mission, when fewer medals were flown than on earlier missions, among the most desirable.

If collectors were to follow a few general succinct “rules” for collecting the Robbins medals, they would be — (1) a medal that has been flown into space is better than an unflown medal, (2) those from the collections of astronauts are worth more than those owned by other NASA staff, and (3) those medals that are from the crew members who flew aboard the specific mission commemorated on the medal usually are the most desirable.

Bobby Livingston, vice president of RR Auctions, expects the collection’s Apollo 17 silver medal to realize between $30,000 and $35,000 in the firm’s fourth space and aviation auction.

The medal for the flight features a raised design of the Apollo 17 mission insignia on the obverse. The reverse features the minted inscription AMERICA-CHALLENGER APOLLO XVII, with separate dates representing the launch date, moon landing date and return date hand-engraved into spaces reserved for the information.

The obverse of the medal for the Apollo 15 flight shows the mission insignia while the reverse features inscriptions, including MAN’S FLIGHT THROUGH LIFE IS SUSTAINED BY THE POWER OF HIS KNOWLEDGE, along with hand-engraving of the launch, moon landing and return dates.

Because of a designer error on the reverse, two different medals were produced for this mission, and Scott’s collection contained one of each. The name of the landing spot, the Apennines Mountains, was misspelled as Appeninnes on the reverse of the original medals, in the fields adjacent to the space for the landing date. Medals with the correct spelling were produced, but only after completion of the mission.

Because of the misspelling and spacecraft weight concerns, the number of flown silver medals on the mission was limited to 127 pieces, with 177 pieces held back.

Post-mission production of corrected medals allowed the minter to do something special in their production. During the mission, Scott carried aboard in his personal preference kit a silver ingot from the 1715 Spanish Plate Fleet. Upon the crew’s return, the Robbins company melted the 177 unflown medals, added the silver from the ingot and struck 177 new medals from new planchets. These new medals thus have the corrected spelling and incorporate the flown Spanish silver (which had a higher fineness than the .925 fine silver in the other medals).

Perhaps the most famous mission was the Apollo 11 mission, which landed a human on the Moon for the first time.

The mission insignia graces the obverse of the Apollo 11 medal. The surnames of astronauts Neil Armstrong, Buzz Aldrin and Michael Collins, along with the hand-engraved launch, landing and return dates, appear on the reverse.

View the auction at www.rrauction.com/. ¦