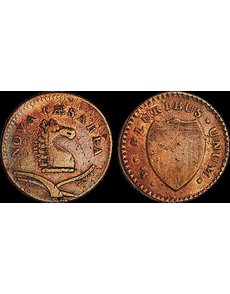 The 1873-CC Seated Liberty, No Arrows dime realized $1.84 million with the 15 percent buyer’s fee during the official auction of the American Numismatic Association World’s Fair of Money in Philadelphia. 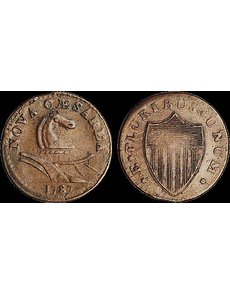 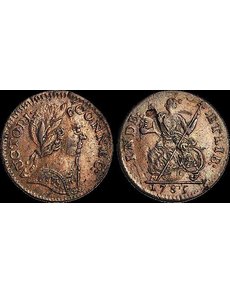 This 1785 Connecticut copper, Miller 6.2-F.1, the Goatee Break variety, is graded About Uncirculated 58 and is in the Condition Census. It will appear in Stack’s Bowers Galleries Americana Sale in late January in New York City. 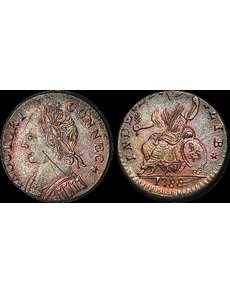 This 1788 Connecticut copper in the Stack’s Bowers Galleries auction, Miller 11-G, is graded Mint State 60 brown and is part of the Condition Census.

Collections of Connecticut and New Jersey copper coins, billed by Stack’s Bowers Galleries as among the finest ever formed, will be offered at auction by the firm in New York City from Jan. 25 to 27.

Begun in the 1960s, these two specialties include Condition Census coins, great rarities, and many other pieces, according to the auction firm.

The two collections are the most extensive of either state offered at auction since the John J. Ford Jr. Collection crossed the block in the mid-2000s (offered by Stack’s), notes Stack’s Bowers Galleries.

Connecticut and New Jersey authorized copper coinages under authority granted to states in the Articles of Confederation. States lost coinage authority when the U.S. Constitution was ratified.

The state of Connecticut desired to issue copper coins and in 1785 granted a franchise to several entrepreneurs. Coinage was accomplished near New Haven beginning that year, continuing for some time afterward. Many different varieties were produced, usually on heavier planchets than later issues. These circulated widely in their time and were a nice addition to other coins then in commerce, such as British halfpence, according to Stack’s Bowers Galleries.

Copper coins of the state of New Jersey were authorized by the Council and General Assembly on June 1, 1786, with the coining privilege or franchise granted to a group of entrepreneurs comprising Walter Mould, Thomas Goadsby and Albion Cox. The contract specified that 3 million copper coins be produced, each weighing 150 grains of pure copper.

Goadsby was a businessman and investor, and Cox, later employed by the Philadelphia Mint, was a skilled silversmith and assayer.

Matthias Ogden, who coordinated the granting of the coining contract, was later involved, apparently more directly, at his home in Elizabethtown. Ogden, who had served with distinction in the Revolution, was a stage-line owner who had a contract for delivering mail between New York City and Philadelphia. He apparently acquired a coining press at some point; his widow sold a press to the Philadelphia Mint in 1794 for $47.44, according to Frank Stewart in his History of the First United States Mint.

The Connecticut copper catalog numbers are attributed to Henry C. Miller, The State Coinage of New England, 1918. The auction is replete with many Rarity 7 (four to 12 pieces known) and Rarity 8 (two or three known) varieties — pieces that according to Stack’s Bowers Galleries are “so elusive that for some it may be many years before another appears.”

Among the highlights in the Connecticut offering is the variety cataloged as 1787 Miller 33.39-s.1, a High Rarity 7. The variety was not in the cabinets of such prominent collectors as R. Henry and Emory May Norweb, Frederick Taylor or Ford “and may well represent a once-in-a-lifetime opportunity,” according to the firm.

The 1787 Miller 49.2-Z.1 variety, with an overpunched inscription of INDE over INDN, is the discovery piece and remains unique.

Similarly, 1787 Miller 49.2-Z.26, another with the INDE over INDN inscription, is the discovery coin and is the only one known.

The 1788 Miller 3-B.1 coin is Rarity 5+ (31 to 75 known) and is the plate coin in Walter Breen’s Complete Encyclopedia of U.S. and Colonial Coins and the Whitman Encyclopedia of Colonial and Early American Coins.

A Mint State 1788 Miller 11-G in the offering traces its pedigree to the Louis E. Eliasberg Sr. Collection, according to Stack’s Bowers Galleries.

New Jersey coppers traditionally are classified by numbers assigned by Edward Maris in A Historic Sketch of the Coins of New Jersey.

The obverse of the New Jersey coppers depicts a horse head above a plow; plow details differ, most prominently in the presence or lack of a “coulter,” or vertical knife or blade on the plow beam.

The reverse depicts a shield with E PLURIBUS UNUM in the first use of that motto on a U.S. coin.

Among the highlights of the New Jersey selection is 1787 Maris 9-G, No Coulter, rated at Rarity 7 with seven known. The coin is graded VF-20, making it the second finest known example.

A few years after Connecticut authorized a coinage in 1785, Thomas Machin, a hero of the Revolutionary War, gathered partners and formed a private coinage enterprise on the shore of Orange Pond, near Newburgh, N.Y.

During the late war Machin had distinguished himself as an engineer by stretching an iron chain across the Hudson River at West Point, to prevent the passage of British ships beyond that spot.

The Machin’s Mills coiners, with almost no official authority, contemplated coins then in circulation and set about making copies of them. Many different counterfeits were produced, which are of great numismatic desirability today and, in fact, generally sell for much more than original strikings made at the Royal Mint in London, states Stack’s Bowers.

Connecticut coppers were among the coins counterfeited, including some with designs that are particularly admired today, according to Stack’s Bowers Galleries, such as the 1787 Small Head issues. Particularly curious is the Connecticut variety 8-I, using the same reverse as a Vermont copper also made at Machin’s Mills. These curious and historical coins are represented in Collection SLT.

In New Jersey, dissension arose among the coiners of that state’s coppers, and the privilege was divided so that Mould could independently strike one-third of the contract.

In addition to official coiners, it is thought that Machin’s Mills produced some imitations of New Jersey coppers and John Bailey struck some in New York City. Facts are scarce, providing ample opportunity for research, according to Stack’s Bowers Galleries. A new study on New Jersey coppers by Roger Siboni, Jack Howes and Buell Ish is in preparation, and information from that study was made available to Stack’s Bowers for the catalog.

“I expect that the Connecticut and New Jersey copper coins in our Americana Sale will create great excitement across all numismatics. In addition, I am sure that this remarkable offering will attract new enthusiasts to these endlessly fascinating series,” said Chris Napolitano, Stack’s Bowers Galleries president.

Collection SLT, in addition to other Colonial coins, will be offered on Wednesday evening, Jan. 25 starting at 5 p.m. EST in the Stack’s Bowers auction gallery on the second floor of 110 W. 57th St., New York City.

Lot viewing for this collection will be held in the Irvine, Calif., office from Jan. 9 to 13 and in the New York City office starting Jan. 19 continuing through Jan. 26. Potential bidders should call 800-458-4646 and ask for Travis MacDonald to confirm an appointment.

For more information on the thousands of other lots, including important rarities from half cents to double eagles, medals, Colonial and fractional currency, see the firm’s website at www.stacksbowers.com. ¦