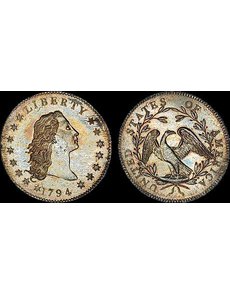 The record-setting $10 million paid for the 1794 Flowing Hair silver dollar from the Cardinal Collection took Q. David Bowers back to 1996 when the first coin to cross the $1 million threshold at auction was sold.

As the Stack’s Bowers Galleries sale of the Cardinal Collection approached, excitement prevailed. What would the prooflike gem 1794 Flowing Hair silver dollar bring? I must have been asked this question dozens of times preceding the auction and in New York City as the magic date of Thursday, Jan. 24, approached.

Being somewhat conservative, I stated that it was 14 years ago, in 1999, when I was at the podium and the Childs Collection 1804 Draped Bust dollar came up for sale. Excitement prevailed, and all bets were off. When the dust settled it sold for $4.14 million — a world’s record price for any coin.

To those asking me about the 1794 dollar, I suggested that if it crossed $4.14 million, it would set a world’s record for a silver coin. Or, if it beat the 1933 double eagle, it would reign as the all-time highest for any coin. The 1794 dollar topped $10 million!

Back in 1996, Auctions by Bowers and Merena Inc. sold the first $1 million coin at auction — a gem Proof 1913 Liberty Head 5-cent coin from the Eliasberg Collection.

My, how times have changed. Today, a million-dollar coin would not be splashed in headlines and shown on screens around the world. More than 50 coins have crossed that mark at auction since 1996!

In my prefacing remarks at the Cardinal Collection auction, this and the adjacent Rarities Night Sale being the capstone of our Americana Sales series in New York City, I said that I have been blessed or gifted with the privilege of being part of the teams that have sold more valuable “name” collections in recent generations than have any others, with no close competition at all.

I was a close friend of Harry Bass, Amon Carter, Ambassador and Mrs. R. Henry Norweb, John J. Ford Jr., and many other numismatic notables, but they had passed to their ultimate reward by the time their collections were auctioned.

I found it indeed nice that the present consignor, Martin Logies, was alive and well and, in fact, came to the podium to greet everyone, to enthusiastic applause. This was an event that will echo in the halls of numismatics for a long time.