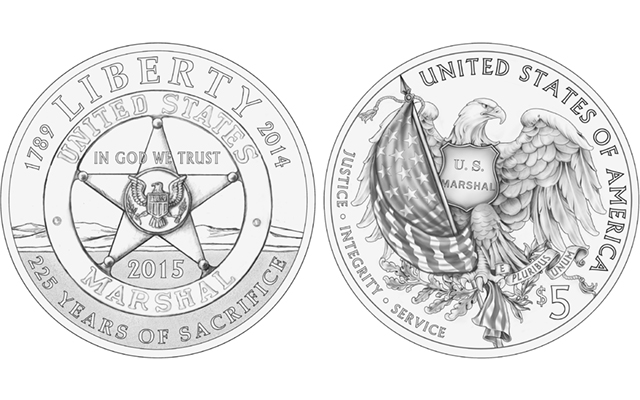 The approved obverse of the $5 gold coin features a United States Marshals badge. The reverse depicts an eagle with a shield on its chest inscribed with U.S. MARSHAL. 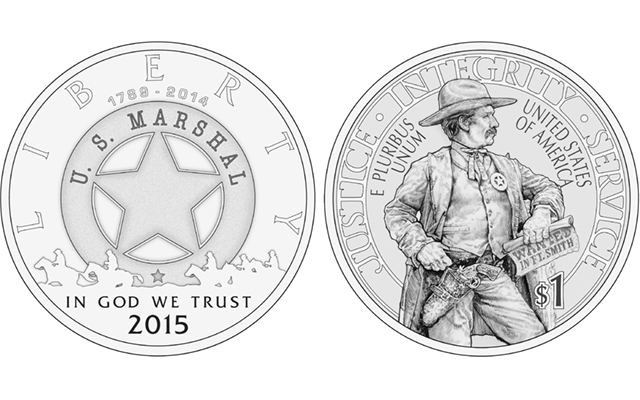 The silver dollar obverse will feature an historic badge and deputy U.S. Marshals on horseback. The reverse features a frontier U.S. Marshal holding a wanted poster that reads “Wanted in Fort Smith.” Fort Smith, Ark., is the future home of the U.S. Marshals Museum. 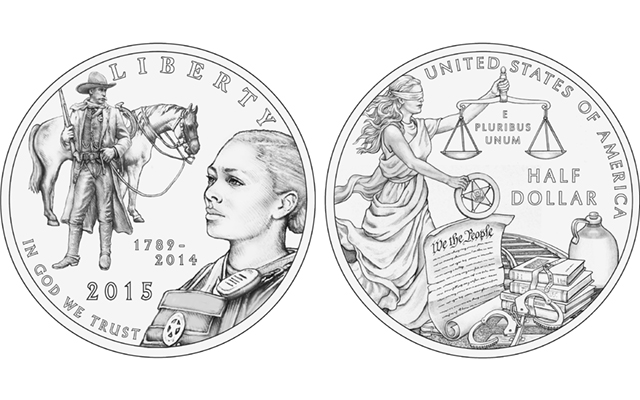 The clad half dollar obverse features a present-day female deputy U.S. Marshal and an Old West U.S. Marshal in the background. The reverse depicts Lady Justice holding scales in one hand and a marshal’s badge in the other. Other elements symbolize U.S. marshals’ involvement during the nation’s changing times, including public school integration.

The $5 gold coin memorializes fallen U.S. Marshals Service operational personnel; the silver dollar honors the agency’s frontier history; and the copper-nickel clad half dollar captures the diverse missions of the agency throughout the nation’s history.

The approved half eagle obverse features a five-pointed U.S. Marshal badge set against a western mountain range and carrying the inscription 225 YEARS OF SACRIFICE. The approved reverse features an eagle with a U.S. Marshal shield on its breast and a draped flag resting across the eagle’s right wing. Near the eagle’s left talons, a scroll carries the inscription E PLURIBUS UNUM. The design also carries the text JUSTICE INTEGRITY SERVICE along the rim.

The approved silver dollar obverse depicts a five-pointed U.S. Marshal badge with silhouettes of western Marshals Service law officers riding across the bottom of the badge, with the words IN GOD WE TRUST and the year 2015 below, and the anniversary dates 1789-2014 above the badge.

The approved silver dollar reverse design features an image of a gritty marshal of the old West, clutching a “Wanted” poster and surrounded by the words JUSTICE INTEGRITY SERVICE in an old-style type face. In the field to the left in two lines is E PLURIBUS / UNUM and in the right field, in two lines, UNITED STATES / OF AMERICA.

The approved copper-nickel clad half dollar obverse features a present-day female marshal in the foreground, wearing an armored vest, and an Old West male marshal with horse and gun in the background. Inscribed are LIBERTY, IN GOD WE TRUST, 2015 and 1789 - 2014.

The approved clad half dollar reverse design depicts Lady Justice holding scales in her left hand and a marshal’s badge in her right extended over the U.S. Constitution. Other elements symbolize U.S. marshals’ involvement during the nation’s changing times: an 18th century whiskey jug (for the service’s role in the 1794 Whiskey Rebellion), railroad tracks (to invoke its role in the 1894 Pullman strike), and schoolbooks (to show its role in ending school segregation).

A pair of handcuffs rests in the foreground.