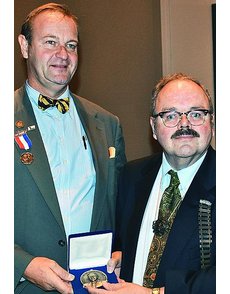 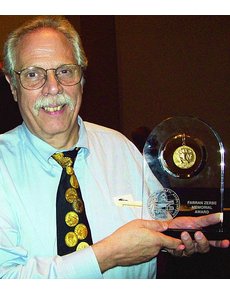 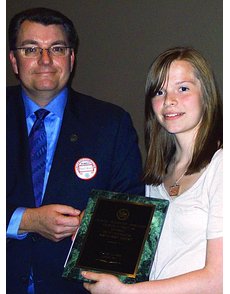 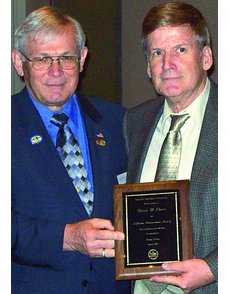 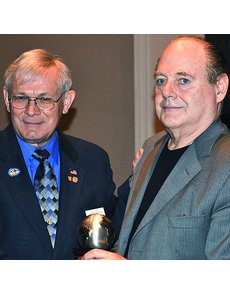 Harlan J. Berk, right, was presented the Numismatist of the Year during the annual ANA banquet by ANA President Clifford Mishler, left.

ANA reported attendance at the show totaled 9,113, including 3,772 general admission visitors and 543 new ANA members, fewer than the 10,204 who attended last year’s show in Boston, but more than the 7,727 who attended the 2009 convention in Los Angeles. More than 4,000 attended the Central States Numismatic Society’s convention held April 27 to 30, also at the Donald E. Stephens Convention Center in Rosemont, but on a different floor than the ANA show.

Shepherd promised visitors that the 2011 ANA World’s Fair of Money would represent the “next generation of coin shows” by offering “the largest, most exciting coin show and convention ever held under one roof.” At 220,000 square feet, the bourse floor was nearly double the size of last year’s ANA show in Boston. Between displays of rare coins from the Smithsonian Institution and the ANA, and several displays of great collections brought by coin firms, collectors had no shortage of great rarities to see in the Museum Showcase and at dealer tables.

The official auctions by Stack’s Bowers Galleries realized more than $40 million while auctions conducted by Heritage Auctions held prior to the show in Rosemont realized $31 million. Multiple six-figure and several seven-figure transactions were reported across the bourse floor, as dealers reported strong sales both at retail and wholesale levels.

While dealers were happy, many noted what felt like an absence of a local coin buying and selling public. Dealer and newly elected ANA Governor Gary Adkins of Edina, Minn., said that the show was continuously busy for his firm, but added that the retail traffic wasn’t as great as he expected. Adkins observed that the show lacked a “wow factor” suited to what is “supposed to be the best show of the year.” His comments on the missing “wow” element were echoed by others, who characterized the vast bourse floor as being tough to navigate.

The U.S. Mint, its booth in a far corner of the hall, was often free of collector traffic — a rare sight during past ANA conventions — and the Bureau of Engraving and Printing’s ever-popular “Billion Dollar Display” was at times empty except for BEP staff.

During the April CSNS show, people could be seen selling large quantities of anything silver — including silverware and tea services. However, at the ANA show few nondealer attendees appeared to be selling coins.

Lyle Walters, a trader with American Precious Metals Exchange in Oklahoma City, said that APMEX had a very busy show start to finish, with the firm’s nine buyers purchasing everything from 90 percent pre-1965 silver coins to pre-1933 U.S. gold coins that had been in family collections. Collectors who wanted to purchase coins from APMEX were directed to Internet-connected computer terminals to complete their transactions.

Brett Charville, a numismatist with Carter Numismatics in Tulsa, Okla., found the show to be the strongest that he had attended in the last four years. He added, “We sold multiple six-figure coins to dealers who don’t normally look at our wholesale inventory,” and noted a palpable “buzz” on the floor for all but the final day of the show.

More than a dozen world mints participated in the convention, and a healthy world and ancient area rounded out the bourse.

Numismatist Larry Sekulich of Livonia, Mich., stayed for all five days at the show, participating as a speaker and exhibitor. He was able to add several pieces to his collection of pre-1500 A.D. coins, and said, “If you collected ancient, world, Byzantine or medieval coins, the dealers were there and they had great material.”

Several initiatives were introduced at the ANA show, including daily dealer tables, which allowed dealers to attend the show and have a retail presence without committing to the entire show. Many dealers seemed pleased with this option. Ken Konig of Greater Milwaukee Coin took a daily table on Aug. 17 and 18 because retail business at his store has simply been too busy to allow a full five-day commitment to set up at the ANA show.

Howard C. Cook of HCC Inc. in Holland, Ohio, took a daily table on Aug. 16 and 17, and he was also pleased, saying that he’d do it again because it gave him a chance to personally meet many of his clients. Both Cook and Konig were able to do a robust wholesale business at the show and then return to their shops to deal with their regular customers.

Another initiative, which had mixed reviews, was the ANA/Professional Numismatists Guild pre-show, held in the same hall as the main ANA show Aug. 12 to 14. The 80 dealers who attended the pre-show were widely spread throughout the vast bourse floor, and dealers were vocal in their complaints about the layout.

The ANA banquet was held on Friday, Aug. 19, rather than the traditional Saturday to accommodate for the new convention schedule.

At the conclusion of the banquet, the 2011 to 2013 ANA Board of Governors was installed: President Tom Hallenbeck, Vice President Walter A. Ostromecki and Governors Gary Adkins, Michael L. Ellis, Jeff C. Garrett, Greg Lyon, Clifford Mishler, Scott T. Rottinghaus and Wendell A. Wolka. ¦