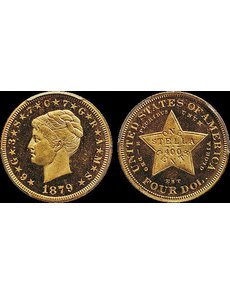 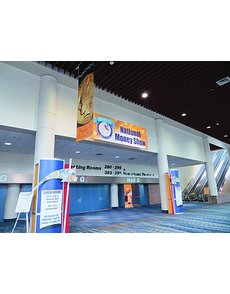 At a kilometer long, the New Orleans Morial Convention Center is huge, but little traffic was seen at the show on Saturday, May 11. This picture was taken at noon.

Heavy rains kept some collectors away from the American Numismatic Association National Money Show in New Orleans, May 9 to 11, but nearly everyone reported having a great time in the historic port city known as “The Big Easy.”

New Orleans is familiar to collectors today as the site of a U.S. Mint, which holds the distinct title of being the only Mint to produce both United States and Confederate coinage. The ANA has a long history with the city as well, hosting conventions there in 1972, 1981 and 1994.

The overall attendance was counted at 3,204. When show officials are calculating attendance, dealers and their employees are counted once. Others, including ANA members, are counted separately for each day attended. While on Thursday, May 9, 1,433 people attended including 854 nondealers, counts dropped to 918 on Friday and 853 on Saturday. By noon on Saturday — the final day of the show — the bourse floor, lively on Thursday, resembled a ghost town.

A board meeting, a spirit healer

The ANA Board’s open session meeting on May 10 started in a unique way as past-ANA President Barry Stuppler introduced a local spiritual healer who performed an elaborate ritual involving newly appointed ANA executive director Kim Kiick. The spirit healer anointed her with orange blossom water to help her overcome the “nastiness left behind” and then gave her sage to help her “remain pure” in her new duties as ANA director. He left her with a sachet, advising Kiick that it would provide an “air of sanctuary” around her. A week before the show Kiick was named the replacement for former ANA executive director Jeff Shevlin, who was ousted after less than a year of service. The ritual led to both the amusement and confusion of the audience and Kiick herself.

After the ritual was concluded, former U.S. Rep. Jimmy Hayes discussed the impact of current legislative efforts to impose an interstate sales tax and its possible impact on coin dealers. About the healer who preceded him, Hayes remarked to a chuckling audience, “you’re all ANA members, so you obviously have to be cured!”

President Tom Hallenbeck announced that, at the prior night’s executive session, a three-year contract for a Professional Numismatists Guild pre-show at the World’s Fair of Money was executed and Robert Wittman was hired to prepare a security assessment for the museum at Colorado Springs, Colo.

Toward a younger demographic

At the open board meeting, three members of a team from Amos Digital — a separate firm owned by Amos Press Inc., the parent company of Coin World — made a presentation about its ongoing project to update the ANA website to increase member numbers, better support fundraising and boost member engagement with a flexible infrastructure. The website team stressed the need to attract a younger demographic to the ANA, stressing that 75 percent of the ANA’s membership is over 50 and that membership has suffered a 20 percent decline in the last four years. The rebuilt site would also include features to increase staff productivity by better managing membership and events including conventions. The team presented an outline for a new ANA website by Aug. 5, 2014.

Among other business items were financial reports including 2012 audits and a proposal to accept the Long Beach Coin Club and the Numismatic Association of Southern California for the co-host clubs for the 2016 World’s Fair of Money in Anaheim, Calif.

Current ANA Vice President Walter Ostromecki presented a motion to expand the number of regular ANA Board meetings and to distribute for new, first-time elected ANA Board members the minutes from both open and closed sessions of the past two years of ANA Board meetings. Both of these measures passed.

This year’s National Money Show benefited by having an auction by Stack’s Bowers Galleries held during the show at the convention center. Last year in Denver, no official ANA auction was held, which dealers said hurt the show.

Another highlight was an undated Liberty Cap half cent blank planchet with a distinctive edge device that brought $19,975. That lot was the subject of a detailed story in the March 18 issue of Coin World. Although the planchet was undated, the edge device on the unstruck planchet is known as the Edge of 1793 and is unique to that issue. This allowed researchers to identify the intended date of 1793. Edge ornamentations on subsequent-dated issues are somewhat different.

An impressive, toned PCGS Proof 65+ Morgan dollar with a Certified Acceptance Corp. green sticker indicating quality within the grade realized $73,439. It was listed as coming “from a New England Museum” although representatives of Stack’s Bowers Galleries could not be more specific as to what institution consigned the dollar and other coins credited as coming from the same museum. ¦